I have reviewed and enjoyed short films by Jeremiah Kipp in the past so when he contacted me with screening links for a pair of his newest shorts I was excited to check them out. Though it took longer than I'd want to just to get around to viewing them (sorry man!), I can't say I was let down by either film. 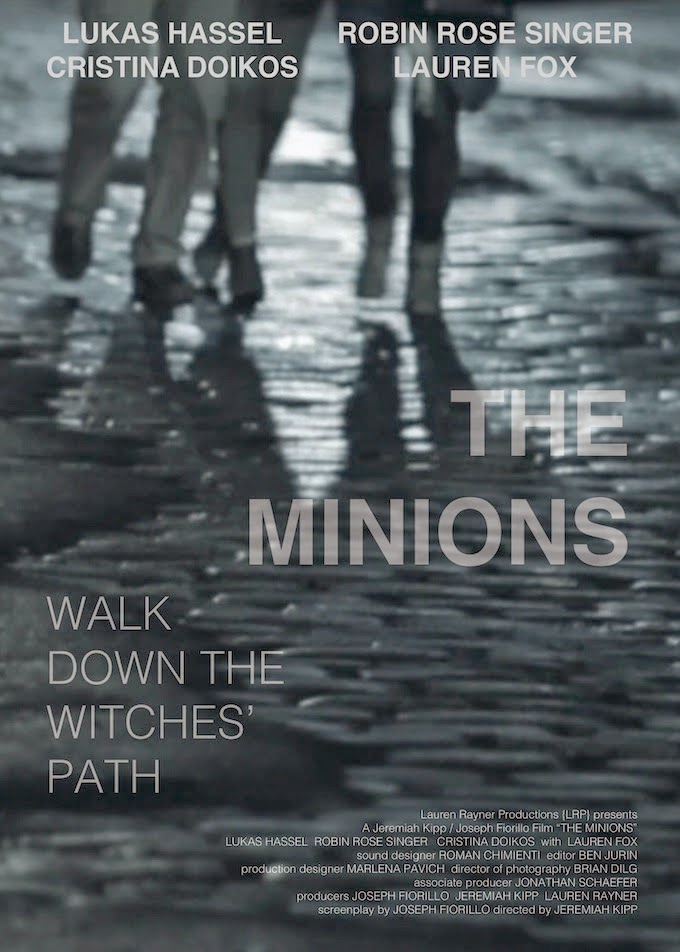 THE MINIONS is a subtle and largely subdued creeper clocking in at eleven minutes. It is a very uncomfortable eleven minutes for the viewer though, as we watch a man named William help a stranger get her drunk friend home as the drunk girl screams at the man to "kiss me" and "love me". William is reliving this account while a voice known as Abigail speaks to him, almost taunting him that he has walked down "The Witches' Path" and that the two women were minions of the witches. This psychological and more mystical horror only heaps on the creepiness as William gets more and more physically attached to the woman he is supposed to be helping and her friend watches helplessly as William takes control.

A minimalist approach benefits the film here as there is nothing excessively graphic about THE MINIONS but what is left to the imagination only makes the situation that much worse. Knowing what William was capable of was horror enough, but flip the page over and look at it that it was all a set up by the witches to seduce William in to portraying a heinous act is just as hair raising. I can't complain about anything here as the photography on the city streets looks great and performances are spot on. The sequences of the film with William talking to Abigail are haunting and beautifully done.

While THE MINIONS took the "less is more" track, PAINKILLER certainly opted to go with the feeling that more is definitely more. The story here pertains to a pair of scientists who are in love and are trying to develop an organism that can live in a symbiotic relationship with its human host. In this case the host would be a terminally ill cancer patient. The organism would be placed into the spinal column of the patient and would feed off of the patient's pain while releasing pleasurable endorphins into the bloodstream effectively replacing the dying patient's pain with pleasure. Since this organism was designed specifically for human use there's no way to test it on animals so the girl lets the man use her as the Guinea Pig and they quickly find that it works very well. The only problem is that the organism survives on pain and it is now in a healthy patient so pain has to be administered. The woman devolves into a state of addiction, and withdrawal when she isn't beaten and tortured enough to get the high she craves from the endorphins being released. Even a dominatrix can't do the trick. Eventually the man calls in another man who will do the dirty work for him but only a price he may not be willing to pay.

PAINKILLER takes a page out of the David Cronenberg book of body horror. There's a good bit of blood and gore packed into the 15 minute runtime and even a good look at the nasty little organism. The acting is strong from top to bottom and the story is one that really hits home in a time where cancer is running rampant and relatively so little progress has been made in fighting it. PAINKILLER is a totally different vibe than THE MINIONS but Kipp handles the direction on both films with grace and skill, getting the most out of his limited run time. I'd love to see a feature length version of PAINKILLER.

PAINKILLER is available HERE
You can find out more about Jeremiah Kipp HERE
Posted by Celluloid Terror (Seth Poulin) at 4:53 PM