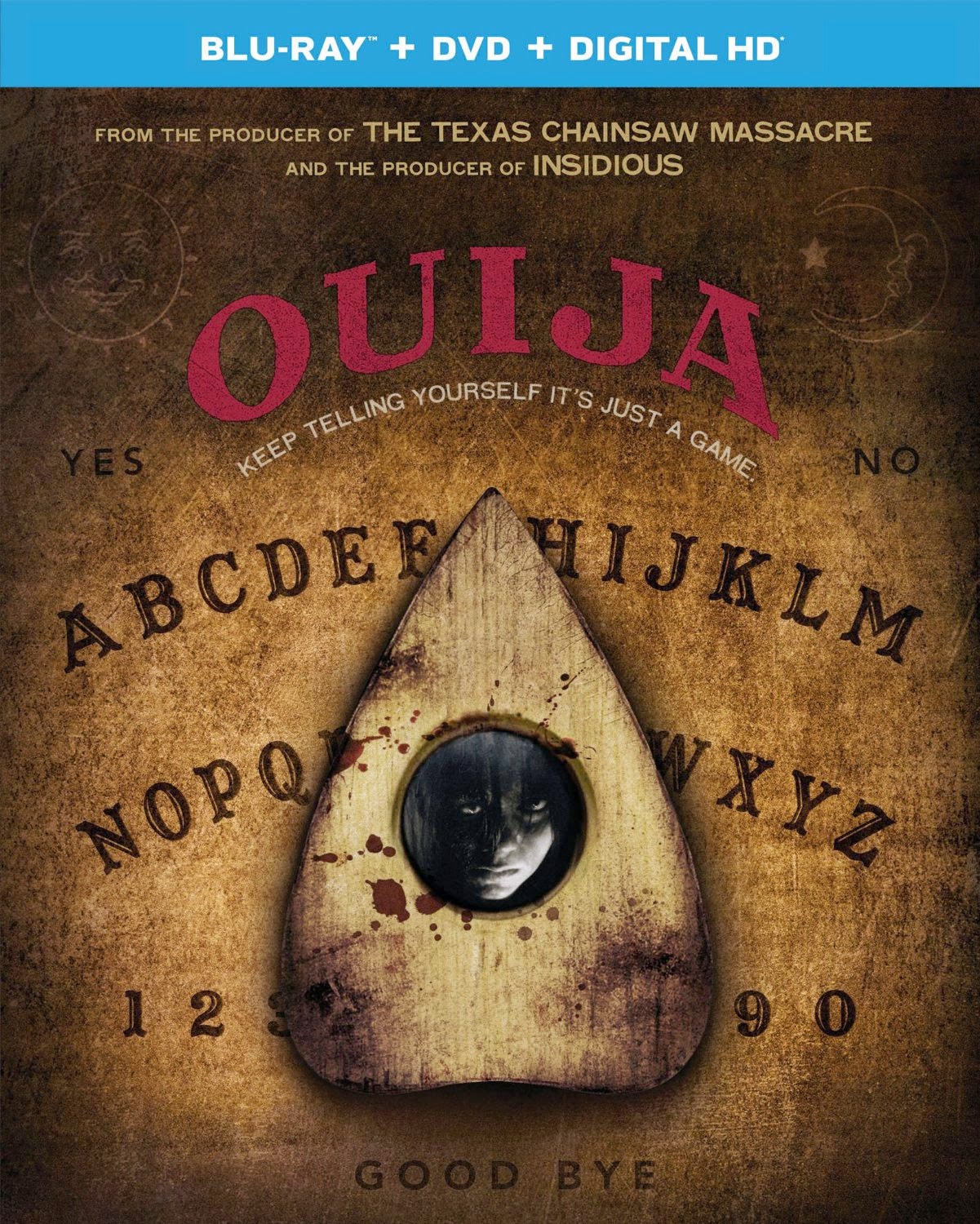 The Film
Best friends Laine and Debbie have played with Ouija boards since they were little girls. Now as they're getting ready to graduate high school, Debbie uses one alone and is disturbed by what she experiences and attempts to burn the board and planchette. After talking to Laine but not letting her inside Debbie's eyes turn white and she hangs herself.

With the tragic death of their friend lingering over them Laine and four other friends gather at the funeral and later decide to have a seance to attempt to talk to their friend, and make contact with a spirit that calls itself "D". The group stops playing after being spooked but each get a message of "Hi friend" and decide to return to the board as they think it is Debbie communicating with them. Quickly they find that it is not Debbie speaking to them but a malicious spirit with their mouth stitched shut and another named "Mother". One by one the friends begin to suffer similar fates to Debbie as their eyes turn white and are killed in mysterious ways. That is when Laine finds out the truth behind the board they're using, the spirits they've encountered and the living relative to the spirits and that intentions aren't always good. Laine and her sister attempt to end the evil by burning the board with the body of the evil spirits that haunt it. 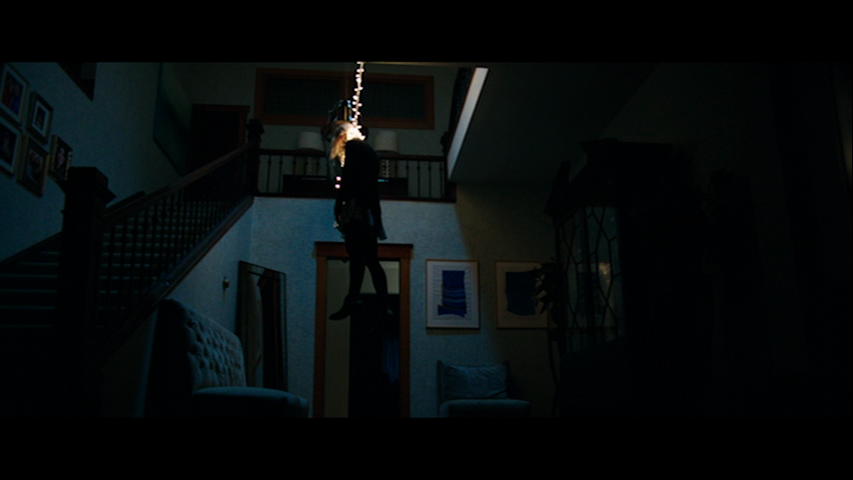 About an hour in to OUIJA I thought to myself "Why is this rated R?". I quickly realized it wasn't. I have nothing against PG-13 horror films as I feel film makers can achieve a proper level of dread, suspense and horror in that rating if they're creative and skilled enough. Unfortunately OUJIA barely deserves the PG-13 rating. A few spooky looking ghosts or bodies is really all I can see separating it from a lesser rating. The film is bland as can be and plays out like a late 90s Scream clone but instead of being a slasher film it is a supernatural horror film. Exchange a fish hook wielding killer for this nasty spirit and I don't think the comparison is to see. 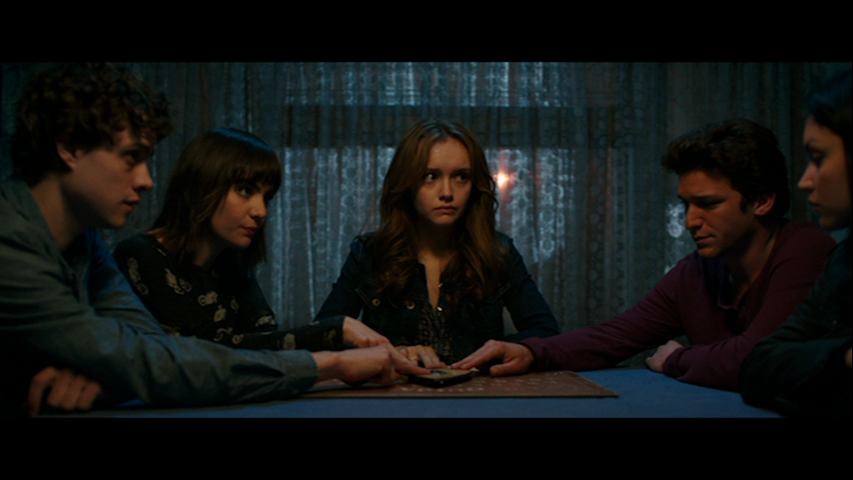 The characters are boring and paper thin, sure they seem like nice kids but none of them are the least bit interesting. Lin Shaye appears in yet another supernatural horror film and she's becoming more common in these types of films than Troma's Lloyd Kaufman is in Z-grade no budget schlock. I like the woman and think she's a fine actress but it's getting old seeing her in these films. The scare and shock moments of the film are laughable. Check out the dental floss scene and try not to laugh. The others are generic paint-by-numbers junk that was all the rage a decade ago. Are we back to it? I sure hope not.

The Audio & Video
Universal Pictures' Blu-ray of OUIJA is downright beautiful. The anamorphic widescreen 2.40:1 aspect ratio has great clarity and strikingly vivid colors. Detail level is very high in textures and surfaces while skin tones look natural and healthy. Black levels are deep and inky with no blocking or pixelation.  The English audio track is a DTS-HDMA 5.1 mix that sounds excellent. The mix is full and boisterous when it needs to be. Dialogue and score are complimentary of each other and there's no background noise or imperfections to speak of. 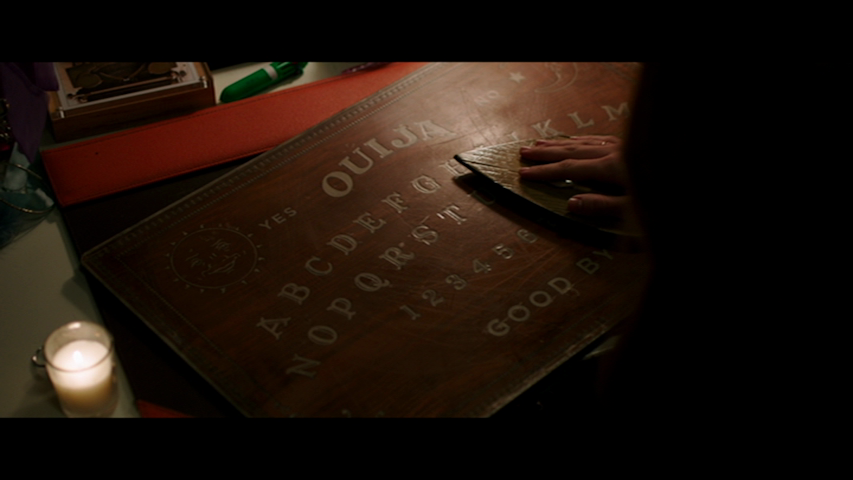 The Extras
-"The Spirit Board: An Evolution" (Blu-ray Exclusive) - A brief 4 minute look at the history of spirit boards and their place in our culture.
-"Icon Of The Unkown" (Blu-ray Exclusive) - Another four minutes spent looking at the experiences Ouija board users have had that influenced the film.
-"Adapting The Fear" - How about another four minutes? This time with a look at the cast and crew's opinion on Ouija boards. 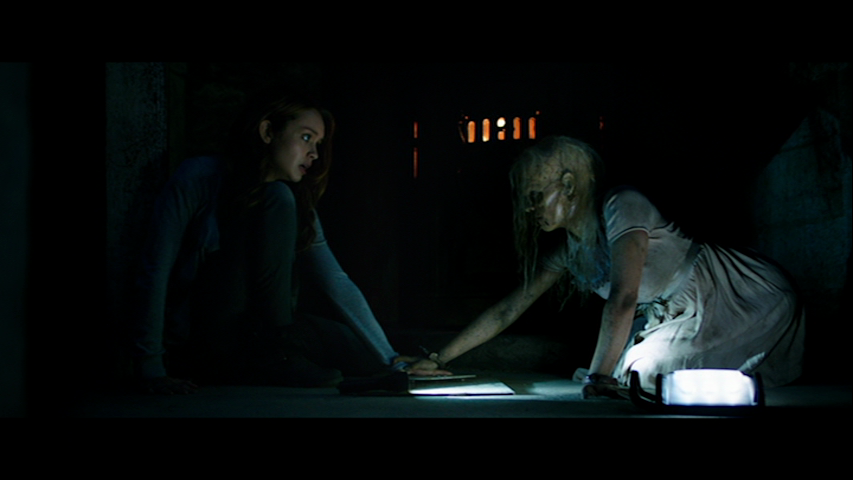 The Bottom Line
To put it simply, OUIJA is not a good film. It is boring and mundane in every way and would be hard pressed to get a scare out of even the most novice horror viewer.

I never really hear anything good about this movie. I think I'm going to have to skip it.

You're not missing out on anything new or worth while Bob.