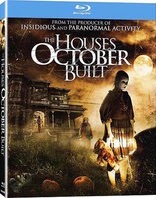 The Film
A group of friends set out in a cross country RV trip to discover the best and most extreme haunted house attractions in the country and document their trip. They interview employees and guests at each haunt as they search for the underground haunt known as The Blue Skeleton which is supposed to be as extreme as it gets. Their trip becomes increasingly disturbing and potentially dangerous as they get closer to Blue Skeleton until they finally get their chance to experience the haunt for themselves.

I've previously sung the praises of THE HOUSES OCTOBER BUILT in a full review of the film itself back during the October Horror Challenge and more recently on my Top Ten Films Of 2014 list so I'll let those posts do the talking for this film. I will say that I was pleased to find out that my first return viewing of the film still yielded seriously entertaining results and that it holds up well.

The Audio & Video
Image/RLJ deliver a gorgeous looking and sounding disc for THE HOUSES OCTOBER BUILT. The 1.78:1 anamorphic widescreen transfer has a very sharp picture with vibrant and vivid colors. Detail level in textures, surfaces and skin is high. Black levels are handled very nicely with no compression issues or blocking, which is very important for a film that largely takes place in dark settings. There are no signs of edge enhancement, or excessive DNR. The picture is crisp and not at all waxy. The 5.1 DTSHD-Master Audio track sounds crystal clear with a steady mix job. Levels don't fluctuate when they shouldn't and there's no distractions such as background noise or damage such as crackling or popping. English subtitles are available.

The Extras
-The Houses October Built- a 94 minute documentary from 2011 that inspired the feature film. (Best Buy Exclusive)
-"Behind The Screams" Featurette - An inside look at the haunts
-Deleted Scenes (24 minutes)
-"Portrait of a Scare Artist" photo gallery
-Cast carvings by The Pumpkin Geek

The Bottom Line
When one of your favorite films of the year gets a beautiful Blu-ray release with a healthy dose of special features how could you not recommend it? Highly recommended!