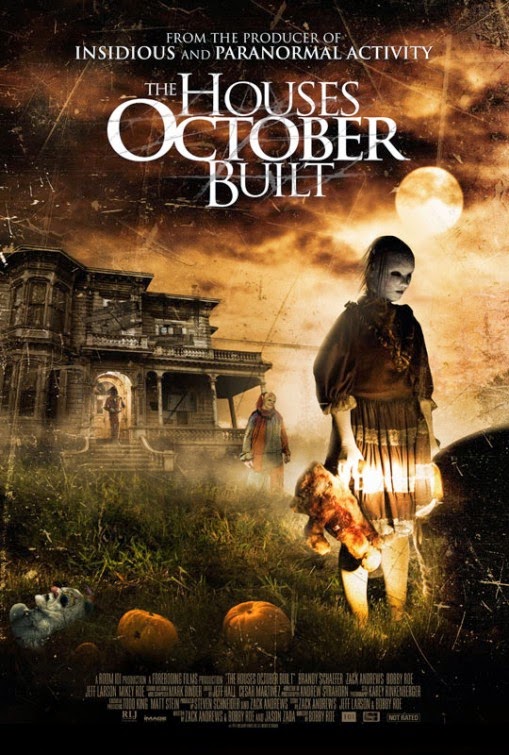 Five friends rent an RV and set off on a cross country tour of haunted houses looking for the best and most extreme haunts the country has to offer. Along their way they document their encounters with colorful locals, haunt employees and all of the ups and downs the trip offers while continuing to hear about a secret extreme haunt known as Blue Skeleton that changes location every year. The trip takes them through some creepy and well done haunts but the real scares are had as they're being followed or perhaps stalked by masked and costumed people who terrorize them in the RV, record them as they sleep and lead them to Blue Skeleton on Halloween night in New Orleans. As the scares get all too real the group wants to quit but Blue Skeleton has one of their friends and threatens to kill him if they don't play along.

THE HOUSES OCTOBER BUILT is a found footage horror film and thank the fucking lord they used the method of filmmaking to their advantage and it made the movie better. This movie goes beyond creepy, its down right scary. It has an air of reality that penetrates it to its core and draws the viewer in to the story and the group and makes the viewer feel like they're part of it all. You'll be on a downward spiral of smiling with the extremely likable cast as they party and have fun early on and start squirming and becoming noticeably uncomfortable and upset by the end.

Bobby Roe directs the film that he wrote along with Zack Andrews and Jason Zada. The story is tight and works beautifully. This is the worst possible scenario for going to a Halloween haunt attraction played out in frighteningly realistic detail. The main cast consisting of Brandy Schaefer, Zack Andrews, Mike Roe, Bobby Roe and Jeff Larson have great chemistry to the point where I wouldn't be surprised if they actually were long time friends. their performances and personalities were essential to the success of the film and they knocked it out of the park.

THE HOUSES OCTOBER BUILT is a perfect film to watch this time of year and would aid in the experience of your haunted house visit. This excellent film is on VOD and in select theaters now and you should absolutely sit down and watch it.
Posted by Celluloid Terror (Seth Poulin) at 10:46 AM

Oh! I didn't realize it was in any theaters. Gonna try to hunt down.