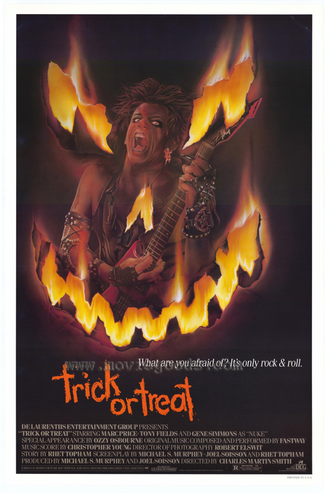 A very long overdue re-watch of the 80s metal driven TRICK OR TREAT was up first. Man is thing in need of a special edition. The DVD is a no frills, full frame release with Gene Simmons and Ozzy (who make up about 2 minutes of screen time) plastered on the cover. This is silly fun as a recently deceased rock star comes back to haunt his biggest fan through a rare record and terrorize the school on Halloween. Plenty of action and death and a lovable metal head outcast kid for the lead make it a good time. 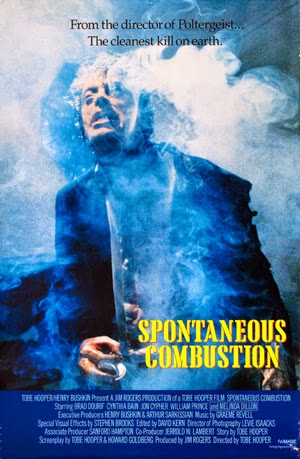 The lone first time viewing of the day was Tobe Hooper's SPONTANEOUS COMBUSTION starring Brad Dourif. This film is about a man who was born to parents that volunteered to test anti-radiation drugs. Well they didn't work and the radiation has caused a genetic mutation that makes their son burst in to flames, along with plenty of people around him. There's no shortage of burned up bodies here and the movie is pretty decent while not being anywhere near the level of Hooper's Texas Chainsaw Massacre, it is also far above Hooper's worst work. 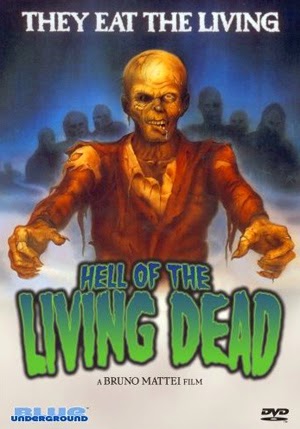 A Bruno Mattei double feature closed the day with the first half being HELL OF THE LIVING DEAD. I probably wouldn't have watched this film this month if Blue Underground hadn't released it on Blu-ray back in August. I was dying to check out how it looks (fantastic) so I popped the disc in. I love this piece of shit. It's a trashy zombie film that rips off Dawn of the Dead (and even recycles its score from Goblin) and really isn't good. But man oh man is it fucking awesome. 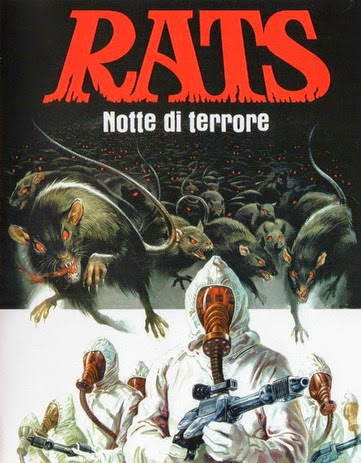 Then the other half of the Mattei double feature may be even trashier, sleazier and crappier. Which means I love it just a little bit more. RATS: NIGHT OF TERROR is a horror film with a bit of post-apocalyptic action thrown in as a couple hundred years after the nuclear wars have devastated the Earth and humans take solace underground except for roving bands of badasses it seems that rats have developed a taste for human flesh. Our group quickly finds that out and realize they are trapped in this deserted town and are being attacked by the rats. Lots of gore, lots of skin, lots of action and one of the best endings ever make this one an amazing piece of Euro trash.