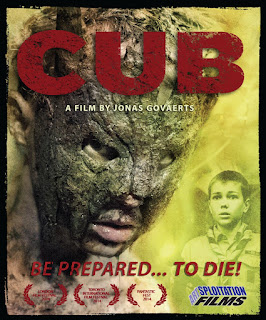 The Film
A cub scout troop takes a weekend camping trip to the forest where things take a turn for the worse when Sam who believes in the scary stories his troop leaders have told. After encountering a feral boy and his brutally psychotic father Sam's fears of the supernatural have become frighteningly real and the whole troop is in danger.

CUB touches on themes of fairy tales, ghost stories, urban legends and fantasy stories. It is a killer in the woods style slasher film without the campiness of many slashers. CUB is a mean film and it doesn't take more than a single look at how Sam is treated by just about everyone or the scene with Baloo's dog. Director Jonas Govaerts wasn't interested in making a horror film that plays nice with its audience. This is a visceral viewing experience.

The acting is quite good, especially for a cast made up mostly of young teens. There's never a single moment where I think that a character is acting or that any performance takes me out of the movie. It's all very natural and organic feeling in front of the camera. The great performances are aided by wonderful direction and cinematography by Nicolas Karakatsanis. But perhaps the best part of the film's visual look and soundscape is the score by Steve Moore of the synth rock band Zombi. Moore is no stranger to scoring films as he is responsible for the scores for The Guest and Gutterballs among other horror films. The electronic score perfectly adds to the emotion and feeling being visually expressed on screen without forcing itself upon the audience. It is perfectly melded into the movie so you pay just enough attention to the score itself to enhance the rest of the film.

The action in CUB starts a bit slow but the film never drags because of it. The characters are developed nicely so we learn enough about the handful of main characters so that we develop the proper feelings toward them without slowing down the entire film because of it. There's no shortage of horror and action in CUB even if it takes a bit to kick in to full gear and nobody and no thing is off limits. CUB has some excellent special effects on display with a mix of practical and mostly very well rendered CGI.

I can't speak highly enough of CUB. From viewing the trailer months ago I was anxious to see it but leery that I'd be let down as I frequently am from films that look promising from their trailer. Finding new high quality horror isn't as easy as it may have been at one time but the quality stuff is still out there and CUB is proof of that.

The Audio & Video
Artsploitation Films delivers CUB on Blu-ray in a beautiful full HD 1080p anamorphic widescreen 2.35:1 scope transfer where colors are vibrant and skin tones are fleshy and natural. There's no signs of waxiness from excessive DNR or any signs of edge enhancement. Black levels are deep and inky and artifact and compression issue free. Detail level is strong and the picture is quite sharp. The Flemish and French audio track is handled by a very crisp and crystal clear 5.1 HD track with optional English subtitles. The audio is free of any distortions or background noise and sounds really nice and has a fantastic mix between dialogue and the score. The subtitles are timed perfectly and translated perfectly.