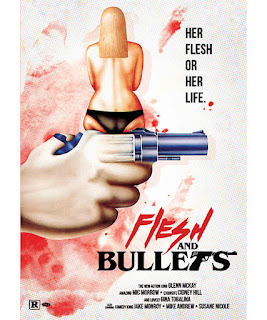 The Film
A pair of divorced men fed up with their ex-wives bleeding them dry meet in Las Vegas and make a plan to kill each other's wife. The catch? If they fail to do so they're fair game to be killed as well. The plans get tangled when each man begins to fall in love with their respective target.

Carlos Tobalina is known for his extensive work directing X rated films in the '70s and '80s, plenty of which have been covered here on Celluloid Terror. He's no stranger to creating entertaining films and this rare venture outside of the X rating finds him creating a sexy thriller based on Alfred Hitchock's Strangers On A Train. 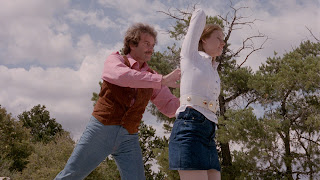 While the film doesn't have the budget, beautiful camerawork, top notch performances or signature Hitchcock moments, FLESH AND BULLETS does have well, flesh and bullets. The artistry of Hitchcock's classic is replaced with lots of nudity and sex (no hardcore shots), including scenes with adult stars Mai Lin and Sharon Kelly and some tense action scenes.

Is it fair to really compare the two films? No, probably not. There's no way FLESH AND BULLETS could live up to the film it is mimicking but Carlos Tobalina works within his limits and makes a largely successful skin and guns thriller that will appeal to a wider audience than his normal output.

The Audio & Video
It's immediately apparent that the film elements for FLESH AND BULLETS have been kept in pretty good condition because this DVD from Vinegar Syndrome is nice. The 16x9 transfer has a nice sharpness for a standard definition release along with an overall clean presentation and nice colors. There's some speckling and minor damage but nothing major or distracting. The mono audio sounds good with about as much wrong with it as the picture quality, that's to say nothing much. 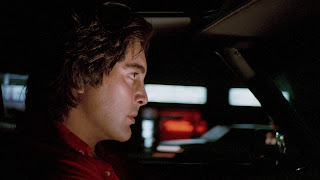 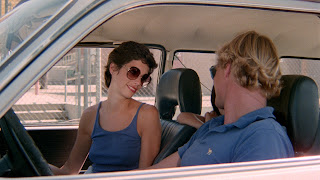 The Bottom Line
Sexually charged but not reliant on being hardcore, FLESH AND BULLETS is a fun, tense and seductive thriller that takes Hitchcock on a cab ride through 42nd street. Recommended!

At the bottom of enmity between strangers lies indifference. See the link below for more info.