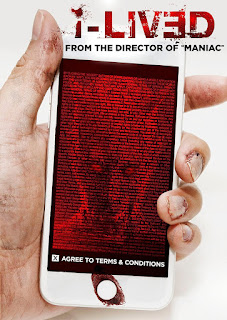 The Film
I won't go into great depth on the film itself as our previous review perfectly sums up my feelings toward the film and nothing changed on a 2nd viewing. It's a rather unspectacular let down from a director I had hoped would continue making great movies after his remake of Maniac.

The Audio & Video
XLRator Media gives us a nice DVD for the film however with an anamorphic widescreen transfer that has good sharpness for a standard definition release. Detail is decent and the picture is quite clean and attractive overall. The English audio is handled with a 5.1 Dolby Digital track and sounds very clear and crisp and has a well done mix with the score. There's no damage or distracting background noise present.

The Extras
Aside from a trailer the lone special feature is a downloadable app second screen experience that syncs up with the film's dialogue and soundtrack to offer a unique viewing experience. Unfortunately my phone doesn't have a current enough operating system (and my phone is not particularly old) to try it out.

The Bottom Line
I'm not a fan of the film but the DVD is solid and though I'm not a fan of gimmicks that take the viewer's attention away from the film itself I must admit that the app download feature fits very well with the theme of the film and is an interesting idea.