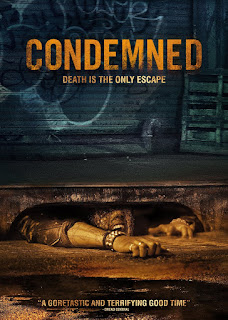 The Film
A well off teen girl escapes bickering parents to live with her aspiring musician boyfriend and his roommates in an abandoned Manhattan building filled with other squatters. The mix of chemicals from all of the derelicts calling the building home combine to destroy the minds of the residents and turn them into drooling, puss spewing maniacs.

In the vein of classics like Street Trash and Slime City, CONDEMNED is a seedy splatter horror film set in New York City. The abandoned building with its flickering lighting, dripping pipes, and graffiti covered walls serves as a properly disgusting and scary setting for the film to take place in. There's plenty of colorful characters on display like the rich runaway trust fund girl, the wannabe punk rock stars, the abusive pimp and his woman, the leftover superintendent from the 70s, the meth cooker, the Neo- Nazi and his gay sex slave, and the junkies. This is the all star lineup of fuck ups and that makes every character unlikeable and totally disposable.

There's a big plot hole at the end involving our main protagonist girl and the CDC where they've taken her into custody with the sickness that infected the building and have no idea who she is despite that she'd obviously be on recent missing persons reports. It's forgivable and easily overlooked but it is there. The film stands toe to toe with the messiest splatter cheese fests. Abscesses are popped, disgusting vomit is spewed, blood is sprayed and in various colors. 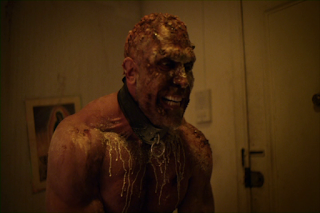 Acting is a bit over the top for as each character plays a mini caricature of their stereotype and it works for the tone of the film as the whole thing is a bit over the top in violence and excess. I feel there is a bit of an homage to Return Of Living Dead on display with the camera following the various chemicals mixing and dispersing into each apartment similar to how the infected zombie smoke flowed up through the pipes and into the sky forming acid rain in Dan O'Bannon's classic 1985 horror comedy. I appreciate how director Eli Morgan Gesner linked the various residents of the building through their disgusting pipes.

CONDEMNED isn't perfect by any stretch, there's a painfully out of place scene involving a couple of policemen smoking weed that could have been handled much better to keep the point and outcome of that scene the same. It is hamfisted and feels like it was part of another script. The effects on display aren't always the greatest and that all of the characters are unlikable, including our rich girl Tess that the film wants us to cheer for but we have no reason to, takes away our emotional connection to anybody involved in this situation. It's not perfect but the faults are points deducted on a passing grade and not a failure.

The Audio & Video
RLJ/Image deliver CONDEMNED on DVD in a nice looking anamorphic widescreen 1.78:1 transfer with dark and inky black levels and solid detail for a standard dvd. The Dolby Digital 5.1 audio features a nice mix job. The soundtrack and dialogue are complimentary while there's no background noise or audible hiccups. 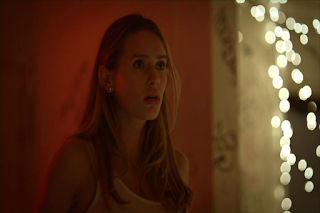 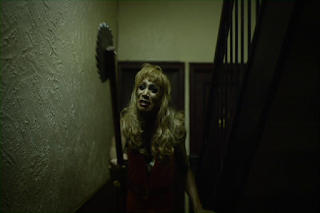 The Bottom Line
CONDEMNED is flawed but fun and deserves an audience. It is a nice way to start off the 2016 horror year and hopefully it gains some attention.