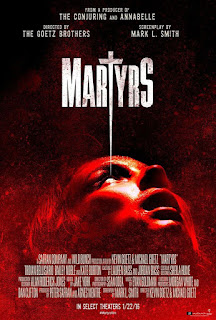 The original French production of Martyrs from 2008 was part of a wave of films from the country that bombarded audiences with extreme violence and a metric shit ton of gore. Along with Frontier(s) and Inside Martyrs helped launch France into the forefront of horror fandom. For better or worse. Frontier(s) was a passable horror film with a lot of half realized ideas it is worth a watch. Inside fares far worse being nothing more than gore for the sake of gore without any real thought put into a cohesive and believable story. This film panders to the lowest common denominator of gore hound. Martyrs on the other hand offered up something a bit more serious, deeper and certainly colder. It featured all of the shock and gore that the wave of French films had been known for but the film had depth and levels to it that it's blood soaked predecessors of a year earlier did not. Martyrs gained plenty of positive reviews and acclaim from fans and like plenty of films before and since, the remake was quickly planned. As immediate as the year it was originally released, the remake rights to Martyrs were being negotiated but it would take another seven years to have the film fully realized and produced.

2015 saw the quiet production and announcement of completion of the US remake, MARTYRS. With little fanfare or coverage the film was shot and awaited its release date, surprising fans with the news. Now that film is here it is finally time to see if the more than half decade of fuss and back and forth was worth it. And I can firmly sit here and answer that with a resounding - sort of. It was sort of worth it. I'm sure it will be worth it for the producers who stand to make money on the film as the budget had been cut numerous times over the years but that didn't affect the film. Audiences who are familiar with the original will find little new ground covered here despite it being a completely watchable and enjoyable film but new audiences have the most to gain as it will be something entirely new to them. 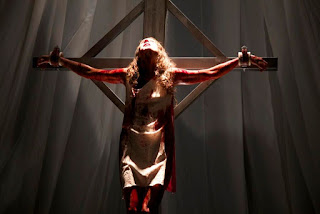 MARTYRS centers around a pair of girls who become best friends at a young age at a Catholic orphanage. Years later one of the girls shows up at a secluded house and opens fire on the family inside with a shotgun claiming she knows it was the father who had kidnapped and tortured her years prior. The girls quickly find out about the depraved experiments being run out of the house by a secret group and they're thrown headfirst into a living nightmare that will quite literally bring them to the brink of death.

The budget cuts this remake went through may have played in its favor as the film doesn't try to be bigger than it needed to. The secluded house setting and underground laboratory type setting are more than enough to carry the majority of the picture. It keeps the film a bit tighter and doesn't let it wander. The Goetz Brothers offer up rock solid direction that occasionally shows a bit of flair with the camera. Our two lead girls have a natural connection on screen giving the audience a true set of protagonists to care about. 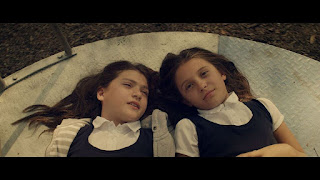 I could spend plenty of time talking of the characters but the majority of people interested in this film whether as a remake of the original or totally on its own merits will be mostly showing up for the violence, which is plentiful. And not only plentiful but it is graphic, rarely shying away from showing your the dripping and the pulling and the cutting. Flesh may as well be pizza dough and blood the sauce because you see so much of it that it almost becomes second nature.

MARTYRS ended up surprising me that it wasn't more of a mess given how long it took to actually come to fruition. The movie is entertaining and competently made without being the cold day ruiner that the original ends up being.

Posted by Celluloid Terror (Seth Poulin) at 11:12 AM