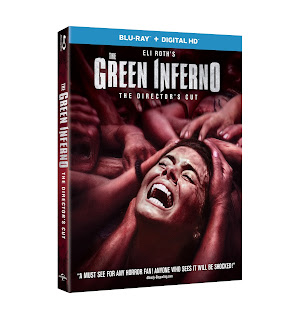 The Film
A group of college students determined to protect the rainforest fly to Peru and crash land in the Amazon jungle where they are captured by a tribe of cannibals and suffer brutal and grotesque acts of savagery while their very existence becomes a fight to survive.

I'm a huge fan of the Italian cannibal films that were released in the 70s and 80s from Umberto Lenzi's Man From Deep River that started it all to the infamous classic Cannibal Holocaust from director Ruggero Deodato. Eli Roth has made it known that's he's a big fan of these films and wanted to make his own film to pay homage to them with THE GREEN INFERNO.

I'm watching this film again to bring you a review and I hope you appreciate it because this movie is pure ass. Where even the lowest form of the Italian cannibal films succeed at only being an exploitation film with graphic imagery and questionable agendas at least they succeeded at being sleazy entertainment. THE GREEN INFERNO isn't entertaining and it is filled with obnoxious unlikeable characters and wooden acting. 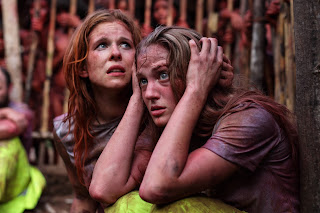 Many of the big scare and gross out moments of the film are filled with awful looking CGI that not only takes the viewer out of the moment but can actually have you laughing at the screen when you should be shocked and deplored - one look at the "ant" scene will show you exactly what I mean.

The film is a mess from start to finish with moments of comedy sprinkled throughout that have no place being there. Any message that Roth wanted to convey is completely lost. I doubt there was ever one to begin with.

I'm done talking about THE GREEN INFERNO. I endured it a second time for this review and that will be the last time I waste my time on it.

The Audio & Video
The Blu-ray from Universal features a stunning full HD 1080p transfer in the film's original 2.40:1 aspect ratio. Colors are vibrant and jump off the screen from the lush greens to the blood reds and various color paints used on the native's faces and bodies. Skin tones are fleshy and natural with no signs of waxiness. There's excellent detail level in both surfaces and textures, from the barks of trees to facial hair and threads of cloth. A DTS-HD Master Audio 5.1 mix handles the English audio with great success. The mix is brilliant as background noises such as wild birds and animals are noticeable without taking away from the more primary channels of dialogue and score. There's not a single bit of damage or background noise evident in the crystal clear track. You couldn't ask for a nicer A/V presentation of the film. 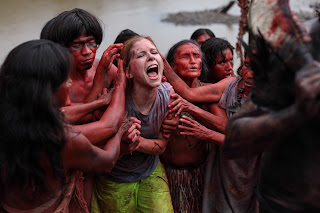 The Extras
Where Universal killed it with the A/V, they totally dropped the ball on special features including only a audio commentary track and a still gallery. A featurette on shooting in the jungle, the history of cannibal films and where THE GREEN INFERNO fits in, or cast and crew interviews would have been a welcomed addition to really round out the disc. 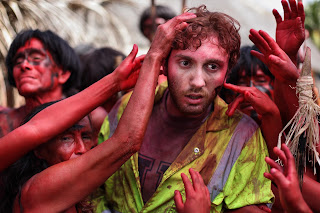 The Bottom Line
If you're a lover of modern gore movies and don't care about decent writing, acting or watching a good movie in general you may find something to enjoy here. This is shock value for the sake of shock value and doesn't even entertain on the lowest levels.