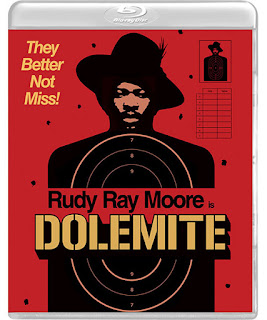 The Film
Dolemite is getting out of prison after being set up by a rival and some crooked cops. His friend Queen Bee helps him get out and has vowed to get revenge on Willie Green and get his club back with help from his gang of kung-fu fighting women.

To put it simply DOLEMITE is classic blaxploitation and one hell of a good time. Rudy Ray Moore developed the Dolemite character previously with a series of urban comedy records with raunchy titles and racy cover art. After building a fanbase he decided to self finance the DOLEMITE film without the support of his friends who never thought it would pan out. Pan out it did and we're treated to an action packed, riot of an exploitation film filled with incredible one liners and rapping monologues many of which were made up on the spot. Rudy Ray Moore totally embodies the DOLEMITE character and Lady Reed is completely believable and commands respect as the only woman that Dolemite sees as his equal. He's a slick man and she's a bad broad and they're a badass tag team. 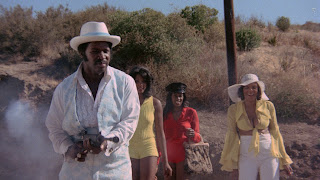 Blaxploitation legend D'Urville Martin made his directing debut here, one of only two feature films he would helm, but shows he can handle a picture. While his direction isn't flashy Martin competently captures all of the Karate kicking, gun shooting, and gut ripping. Martin also co-stars as Dolemite's rival Willie Green and he's obviously comfortable in front of the camera and proves to be a formidable and downright ruthless foe for Dolemite. Not to be outdone, Rudy Ray Moore also proves to be a natural in front of the camera and he oozes charisma. This is his acting debut but you can already tell that he has the Dolemite character nailed down.

You don't watch DOLEMITE for the script or the artistry, you watch it for the funk and soul, the action and the laughs. There's no rat soup eating going on here, just the start of a great series of related films starring Rudy Ray Moore.

The Audio & Video
Vinegar Syndrome have preserved this classic piece of blaxploitation with a gorgeous 1.85:1 anamorphic widescreen transfer taken from a new 2K scan and restoration from a 35mm negative. While there are still some scratches and speckling present the overall picture quality is outstanding. Detail is extremely strong especially in closeups. Skin tones are gorgeously natural and fleshy without any signs of waxiness. There's a very nice grain structure to the picture and little to no digital noise. The DTS-HD Master Audio mono track sounds excellent - as good as the picture looks the audio sounds. Dialogue and music don't fight for the foreground as they compliment each other quite well. The audio is clear and crisp with steady levels and a strong body. 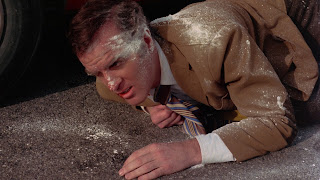 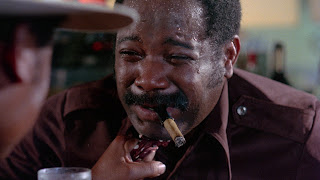 The Bottom Line
On the day he was born his father wore a sign that said "Dolemite is here!" On the day this disc was born the definitive version was here!