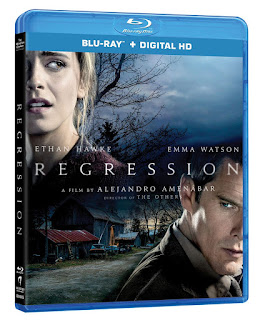 The Film
In 1990 a wave of fear involving Satanic cults has swept the country and in Minnesota detective Bruce Kenner (Ethan Hawke) has been assigned a case of Angela (Emma Watson) who has accused her father of ritualistic rape and torture. Her father has blocked the memories and undergoes regressive memory therapy to help him relive memories that open the door on a much bigger and deeper mystery.

Written and directed by Alejandro Amenabar (The Others), REGRESSION is an engaging psychological thriller with roots its roots planted in horror films from the 60s and 70s. The story and characters make REGRESSION the film it is and carry it so that it doesn't need to rely on shocks and scares. Ethan Hawke is dynamic and strong as detective Kenner and Emma Watson is perfect as the traumatized victim who gets our sympathy. The darkness she's dealing with and a family she can't confide in make us want to hold and shelter Angela, giving her protection from the physical and mental demons. Along with David Thewlis who is great as the psychologist on the case, the entire cast is great and make Amenabar's sometimes emotionally trying script feel real. 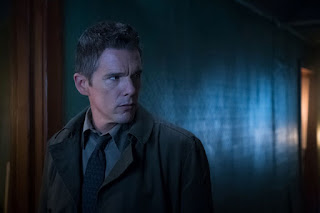 While REGRESSION is mainly a character and story piece, there are a few creepy scenes including flashbacks of black mass and cult rituals. These scenes aren't overly explicit but instead use atmosphere, setting and camerawork to be downright unsettling. REGRESSION has a very oppressive look and feel to it. It's dreary, cold and overcast and that helps build a sense of paranoia in Detective Kenner as the story goes along and he finds himself getting deeper into something that he may not be ready for.

When the credits began to roll I found myself satisfied with REGRESSION and the twists and turns it took. The film plays on the emotions of the viewers and it is entirely possible you'll feel betrayed or cheated by the way it plays out but that is a good thing in this case. I don't think REGRESSION was perfect as some characters come in to play as a major player but are left to do very little of any significance and the story's resolution happens abruptly and it isn't the easiest pill to swallow when it does but the problems REGRESSION has don't nearly stop it from being a well made psychological piece filled with good performances.

The Audio & Video
Anchor Bay's Blu-ray of REGRESSION has all of the bells and whistles as far as the A/V is concerned. The anamorphic widescreen 2.39:1 aspect ratio transfer is pristine. Colors are reproduced with perfection in regards to the look of the film and the black levels are super deep and inky. Skin tones are healthy with a natural flesh tone and no signs of waxiness or excessive DNR. A DTS-HD Master Audio 5.1 surround mix handles the English audio in a dynamic and powerful mix with crystal clarity. There's no trouble with background noise, distortions or damage and there are optional English and Spanish subtitles. 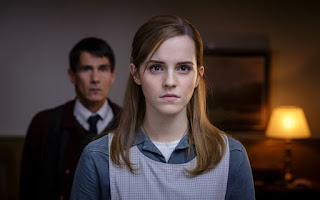 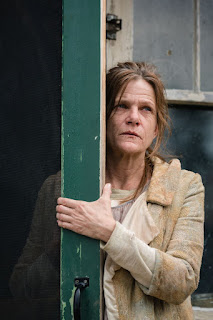 The Bottom Line
REGRESSION deals with a lot of deeper issues than the surface of a psychological thriller mystery movie will show on the surface. It succeeds at being creepy and unsettling at times while being a relatively smart film.

REGRESSION is available HERE
Posted by Celluloid Terror (Seth Poulin) at 11:39 AM