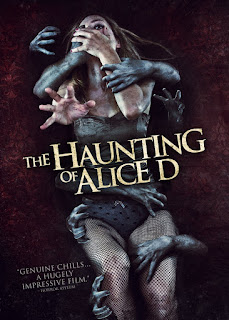 The Film
In the 1890s a young girl named Alice is left orphaned and alone after her parents die and her uncle sells her and her older sister to a wealthy and notoriously cruel brothel owner to pay his gambling debts. Things get worse when her older sister is sold and nobody is left to protect her and she's abused and put in the mix at the brothel until she takes revenge on the owner and takes her own life as well.

Now in present day the heirs to the old brothel are hosting a party at the old house where anything goes with the girls and the drugs but Alice may still lurk within the walls of the brothel and her revenge may not be done yet.

THE HAUNTING OF ALICE D is unremarkable in just about every way. The effects are poor and have a dated and tired look to them. Predictability is a huge problem with this film, from jump scares to character and story development. ALICE D is like a book you've read ten times - you know exactly what the next page holds. It's not like a book you've read ten times in that you certainly won't be going back to this movie again, let alone nine more times. 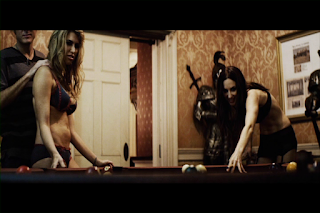 It's also an ugly movie in the most literal sense. The film has almost no color palette as it has a washed out look of creams and grays with faded neutrality being the ruling aesthetic. We're also treated to more lens flaring than a JJ Abrams film. There's no point at all to the lens flare in this film and they get to the point where they're downright annoying.

THE HAUNTING OF ALICE D is not scary, or even sexy despite the premise. It's not interesting or even attractive to look at. It's bottom of the barrel dreck that you're better off not wasting brain space on.

The Audio & Video
The DVD from RLJ Entertainment accurately presents the movie as it was intended to look. The 2.35:1 aspect ratio is intact and the film's soft, often too soft, look that is filled with pointless and frankly distracting lens flares are all on board. THE HAUNTING OF ALICE D has a washed out color palette leaving everything feeling cold and "blah". There's nothing particularly wrong with the PQ of this DVD, as it does a good job of giving us a proper representation of a bad looking movie. The Dolby Digital 5.1 mix sounds fine. It's clean and well mixed. There's no distortions or damage. The audio isn't exactly dynamic or exciting but it gets the job done nicely. 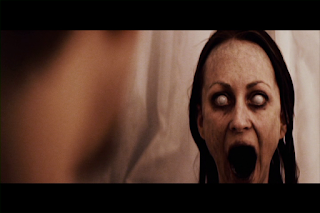 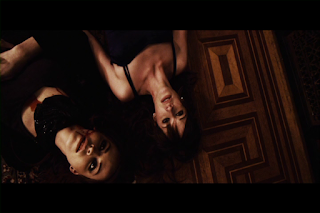 The Bottom Line
If you've ever wanted to see Kane Hodder and former WWE wrestler Al Snow in 19th century garb here's your chance. Otherwise you're better off skipping this one.

THE HAUNTING OF ALICE D is available HERE
Posted by Celluloid Terror (Seth Poulin) at 2:27 PM