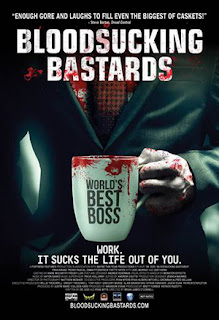 Evan (Fran Kranz) works in a sales office with his slacker friends, his recently ex-girlfriend and a boss that isn't sure he deserves a big promotion. Things begin to look up when Evan is told by his boss Ted (Joel McMurray) to tell everyone of a meeting that he's positive will be the announcement of his promotion but it all falls apart when Ted announces a former college rival of Evan's as the new manager. Bad goes to worse when Evan realizes that the new manager has turned almost everyone in the office in to vampires.

BLOODSUCKING BASTARDS was just another horror comedy that I didn't have any expectations for. I'd estimate that at least eight out of every ten horror comedy I see these days are nothing special. Sure, there may be some laughs or some fun to be had but when the credits roll there's little to set itself apart from the pack. There's plenty of cliches and tropes in BLOODSUCKING BASTARD. Slacker and stoner humor is as popular as it has ever been in TV and film, and that is the back bone of the comedy in this movie. Joey Kern plays Evan's friend Ted and is perhaps the laziest guy in the bunch and brings the laughs time and time again. It's a perfect compliment to the performance Fran Kranz gives as the quiet and reserved Evan who probably cares too much about his job. Evan's relationship with Amanda (Emma Fitzpatrick) is a classic way of getting the audience to root for a couple of genuinely likable characters on more than a surface level. The writing is good enough that we not only want Evan and Amanda to survive the vampire outbreak but we want them to rekindle their love after Evan didn't give a very good response to Amanda dropping the "L" bomb. It's important that the script make Amanda a character to sympathize for and not hate for being a cold bitch about it. Emma Fitzpatrick plays the character as beautifully as she really is.

Pedro Pascal is excellent as the arrogant and appropriately cocky Max who is instantly unlikeable from the second he's introduced with his over the top "We sell dreams" sales pitch to the office that almost anyone can relate to in one way or another. His act is phony and everyone knows it but you have to deal with it for the paycheck. Pascal not only nails it but he also proves to be a formidable opponent to the young couple as the head vampire.

BLOODSUCKING BASTARDS strongest point is probably its characters because there are so many memorable ones beyond the main stars already mentioned. Joel Murray is always a pleasure to see and he is again here as the head of the office.  Marshall Givens plays the tough security guard who also has a soft side for Kelly Clarkson and his repeatedly calling Evan "Colonel Sanders" was hilarious. Marshall isn't given much screen time until the end but he makes the most of it. Then there's the janitor, the stereotypical office cat lady and others who make a lasting impression without needing much screen time to do so.

So yes, BLOODSUCKING BASTARDS is a well written comedy that provides laughs from start to finish but does it satisfy the horror side of things? Yes dear readers, it does. The makeup job for the vampires is on the simple side but they look great and properly menacing with just a set of fangs and well done undead makeup. The laughs are still a major part of the film and they don't stop even during the more horrific parts of the movie as the vampires explode into a bloody mess whenever they die covering everything in the office in red colored corn syrup.

It could have been just another time waster good for a single viewing but BLOODSUCKING BASTARDS is a mashup of The Office, Workaholics and Fright Night that I can see myself watching over and over. Come for the vamps and stay for the laughs. Bam snap!

Posted by Celluloid Terror (Seth Poulin) at 12:39 AM