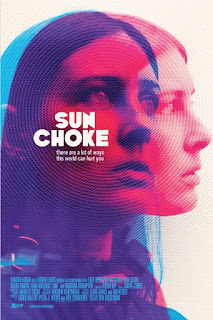 Sarah Hagan stars as Janie, a young woman who is recovering from her latest violent psychotic episode with the natural holistic treatment of her nanny Irma (Barbara Crampton). Janie's progress takes a turn for the worse when she develops an immediate obsession with another young woman named Savannah (Sarah Malakul Lane). Janie's longing for freedom from Irma and her new found obsession drive Janie to an increasingly violent and damaging place that she may not be able to return from.

SUN CHOKE is very much a film that relies on its central performances due to its rather minimalist nature. There's not much in the way of special effects, fancy camerawork or sweeping landscapes to take the viewer's attention away from the characters. Sarah Hagan and Barbara Crampton are entirely responsible for this film's chance at being successful and they come through with flying colors. Crampton is perfectly overbearing, giving a smothering performance repeatedly ordering Janie to perfect various mental and physical tests with a stern and more than slightly disturbing force to her show of love. Hagan reminds me of a younger Jennifer Connelly and I'm a big fan of Jennifer Connelly. Hagan's performance is mentally distant and cloudy, as she is near perfect in her portrayal of the mentally damaged young woman who seems to never see her actual family. The more that is revealed about Janie the more depth Hagan brings to her performance and that all comes to a head when her attraction to Savannah drives her to what is perhaps her craziest. Sarah Malakul Lane is only in the film sporadically until the finale but she gives a brave and desperate performance as a genuinely beautiful person who is dragged into a nightmare scenario. The trio of females really make the script work. I never question their dialogue or emotion, it all feels genuine and damn near flawless.

While there's nothing especially flashy about SUN CHOKE that doesn't stop it from grabbing the audience with some gorgeous photography. Plenty of tight closeups and interesting exposures and lighting give the film an artistic flair that raises it up another notch to match the screenplay and performances. Writer/director Ben Cresciman has created a really fantastic film from top to bottom and deserves immense praise for writing a simple yet deeply effective script and pairing it with an equally effective visual presentation.

SUN CHOKE is a tight production that is down right chilling at its core and is absolutely worth your time.
Posted by Celluloid Terror (Seth Poulin) at 12:33 AM