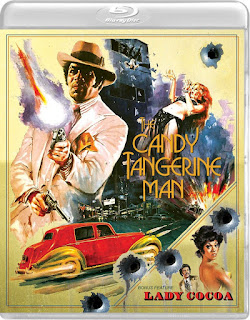 The Films
By 1975 Matt Cimber was no rookie when it came to making exploitation films. The veteran of sleazy, sexy and offbeat cinema released a pair of blaxploitation films that are wildly entertaining examples of the genre.

THE CANDY TANGERINE MAN was released first and to put it bluntly, is one of the finer pieces of blaxploitation I've seen. John Daniels plays The Baron, a pimp who cruises around town in his tangerine and cream colored Rolls Royce. Unlike most pimps The Baron is living two lives with a family back in the suburbs who don't know about his time spent on the city streets. The Baron uses his earnings from his pimping to give his family the best life he can but that all comes to a halt when one of his rivals mutilates one of his girls and leaves him with no business. The Baron doesn't take kindly to this, or the two cops that constantly harass him or anyone that is trying to screw him and he decides to handle the last of his business before hanging up his pimp hat and parking his tangerine Rolls for good.

THE CANDY TANGERINE MAN hits on all of the key notes used in exploitation films - from the charismatic and memorable lead, to the sense of style, violence and nudity it's all here and in droves. That's why we love these movies and that's why I love this one. And we can't overlook the catchy theme song performed by the funk band Smoke. Matt Cimber takes THE CANDY TANGERINE MAN and pushes it passed the surface level entertainment that most exploitation films are satisfied creating. The Baron is our protagonist and could easily be viewed as a grimy criminal who is exploiting women - he is a pimp after all. The Baron is more than just a pimp, he's a caretaker, not just to the family he has back in the suburbs but to the troubled women that work for him. He pays them well and if they don't belong working the streets he tells them so and tries to get them to get far away from the slime that walks the streets at night who would gladly use them up until they're nothing, like one of his rival pimps who says "Man, this gal is gonna make me ten thousand big ones before she wears that slot out!" - Easily one of the sleaziest things I've ever heard in a movie and while I love the line, The Baron's reaction to seeing this girl hooking gives us an immediate glimpse into who the man really is.

It's that link back to human decency that makes The Baron one of the most memorable and most likable characters in all of exploitation cinema in my opinion and raises THE CANDY TANGERINE MAN from an awesome and frankly pretty well made movie to a true classic. 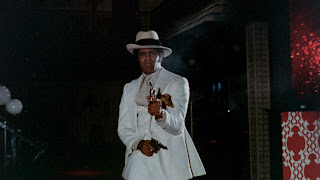 LADY COCOA is not THE CANDY TANGERINE MAN. I am a fan of LADY COCOA, I think it's a well made movie with a gorgeous lead, some fun and interesting locations and a nice little twist ending but it is not the film that CTM is. That isn't to say you should sell it short because while the film takes a little bit to really start rolling once it does it's one mother of a good time.

Cocoa is an inmate who has been granted a reprieve from prison in exchange for testimony against her mobster boyfriend. Cocoa uses her freedom to get dolled up and go to the casino with her undercover police escorts but unfortunately some hitmen are a step ahead of her and create trouble around every turn.

Lola Falana stars as Cocoa, a gorgeous woman with a voice that takes a bit to get used to. Nobody's perfect. Much of the early film is Cocoa bickering with her police escort about just what she is and is not allowed to do. There's quite a bit of sexual tension building and eventually he gives in and lets her go down to the bar and dance and drink with another couple but there's more people on the mob's payroll than they bargained for and eventually business picks up, bodies pile up and engines rev up with fights, shoot outs and a car chase that goes straight through the casino!

LADY COCOA starts out a bit slow while building the story but your patience will pay off with a funky little film that hits all the right notes for a good time with some popcorn and a 40oz. 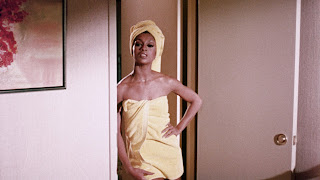 The Audio & Video
Vinegar Syndrome gives this double feature of Matt Cimber films their HD debut. Sadly the negatives were disposed before Cimber evre had a chance to get them back. The 35mm print used for CTM was obviously worn and damaged but it was all there. The 2K scan makes this Blu-ray the best possible presentation of CTM that we're going to get and thankfully it looks good. There are plenty of flaws with scratches and speckling but there's also solid detail in textures and surfaces and great color reproduction from the vibrant car to fleshy and healthy skin tones. There's no sign of crush in the black levels which are nice and deep. 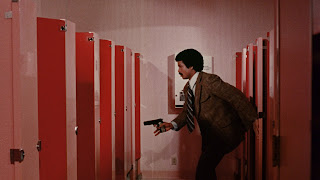 LADY COCOA fare better and looks crisp and sharp. Everything that was good about CTM is even better with COCOA. Skin tones are even nicer, and while the production certainly wasn't as lush as CTM the colors are vivid and strong. Both films feature anamorphic 16x9 widescreen transfers. The audio on each film is handled with a DTS-HD Master Audio mono track that are clear as crystal. There's no background noise, or damage and it's free of any wobble, popping or hiss. English subtitles are included.

The Extras
A commentary track on LADY COCOA with director Matt Cimber and actor/director's assistant John Goff along with a video introduction for THE CANDY TANGERINE MAN are included as the on disc extras. The cover art is reversible to prominently display either film based on your preference. 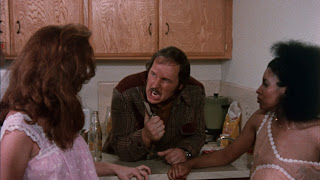