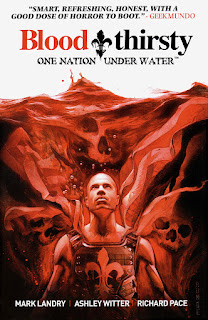 Titan Comics’ original graphic novel, “Bloodthirsty: One Nation Under Water,” is  now available on Amazon and Barnes & Noble.  from author Mark Landry.  This is an amazing project with “Interview With The Vampire” artist Ashley Marie Witter, and Richard Pace (“Batman: The Doom That Came to Gotham”) serving as illustrators.
About  “Bloodthirsty: One Nation Under Water”
Haunted by the catastrophe that tore his city apart 10 years ago, Coast Guard veteran Virgil Lafleur struggles daily with the hardships of a post-Katrina New Orleans. But when his younger brother’s murder leads him into a vortex of intrigue, corruption and violence, Virgil becomes obsessed with bringing the killers to justice and exposing the horrific secret hiding beneath the Mississippi.
ISBN-10: 1785851098
ISBN-13: 978-1785851094
Posted by Celluloid Terror (Seth Poulin) at 11:30 PM