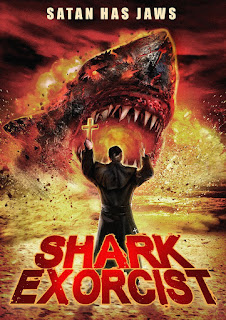 The Film
After a nun makes a sacrifice to Satan a local lake is under attack by a demonic shark which is leaving bloody bodies washing up on the shore. The danger spreads to land as one of the shark's victims survives but becomes possessed by evil forces. It's up to a local priest and a local co-ed to exorcise her friend's demons and send the demon shark back to where it came.

There has to be a certain mindset going into a movie with the title of SHARK EXORCIST. In fact, at this point cheesy shark movies have become so prevalent that the mindset is almost second nature. You have to turn off a certain critical part of your brain to enjoy these movies of giant sharks with multiple heads, or sharks that have mutated with other creatures, or sharks that attack inside tornadoes or in this case are possessed by Satan. They're not meant to be high art and often they're not even meant to be taken seriously. They're meant to laugh at and with whle giving you that campy entertainment that only a giant 3 headed killer shark octopus monster from hell in a tornado could give you. Am I mixing up movies here? 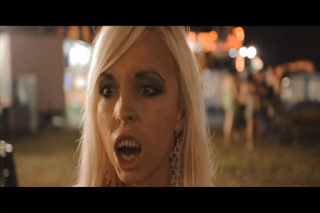 SHARK EXORCIST is a very low budget independent production centering around a highly publicized CGI shark in a lake doing all the killing. This movie would pretty much not exist if people didn't keep tempting their luck and going into this lake where they know a shark is lurking, though nobody questions how a shark made it into a lake. This is where me turning off the critical part of my brain just didn't work.

SHARK EXORCIST only runs 70 minutes total, and only an hour of that is the actual movie, the rest is end credits and following a very minor character around a gift shop filled with aquatic gifts including stuffed shark plush toys that she loves. The last ten minutes drag as much as the actual movie. The 60 minutes of SHARK EXORCIST feel twice as long. For a movie that barely qualifies as a feature length movie there's a ton of filler that doesn't need to be here and could have been cut. I won't fault the film for being low budget and having special effects that amount to little more than red food coloring being splashed around but I will fault it for being an absolutely dreadful script by Donald Farmer. Farmer's writing has no depth or real purpose and ends up being a mess of trying to mash up two classic films into on B-movie idea. SHARK EXORCIST might have been silly fun had Farmer went full bore on ripping off Jaws and The Exorcist instead all we get is some vomiting and a half assed attempt at an exorcism where someone says "We're going to need a bigger cross." 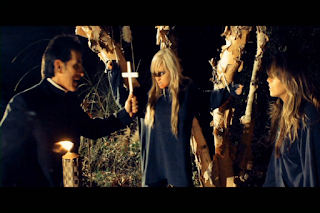 Ultimately SHARK EXORCIST will simply exist in a universe of shitty shark movies and it won't have a real identity to it. It's a poorly made movie with choppy editing, amateur performances that don't get any help from their director who also wrote the piss poor script that they're destined to fail with. I'll admit that I'm ready for this self aware B-movie shark love fest to be finished. So-bad-they're-good  movies are entertaining because they genuinely try their best to make a good movie and the shit that ends up being made organically has a real charm to it. These intentionally bad and ridiculous movies have run their course and the well has run dry. It's apparent that it's now little more than an excuse to make a shitty movie.

The Audio & Video
Wild Eye Releasing's DVD of SHARK EXORCIST looks good. Colors are lifelike and vivid with and overall crisp look to the anamorphic widescreen transfer. The 2.0 English audio is clear with a well done mix between dialogue and soundtrack levels. The audio is free of any distortions. 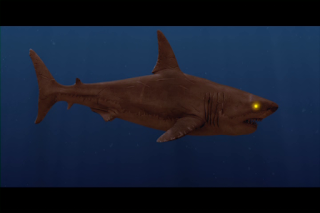 The Extras
A collection of trailers for other Wild Eye films is included as the lone extra. 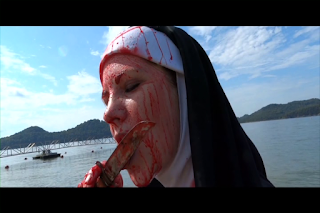 The Bottom Line
Turning the critcial part of my brain off failed here. SHARK EXORCIST was awful and has little to no redeemable or enjoyable qualities to it. I always try to point out the positives within any film I review even if I hate the movie but sometimes it's better to just cut it off.

SHARK EXORCIST is available HERE
Posted by Celluloid Terror (Seth Poulin) at 10:53 AM