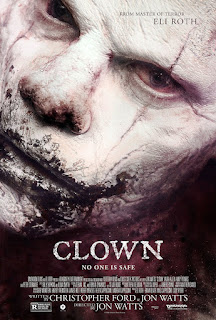 The Film
Kent (Andy Powers) has to fill in as the clown at his son's birthday party after the entertainment they hired didn't show up and the only suit he can find is from an old trunk in a house his real estate company has been hired to sell but after the party he finds that the suit won't come off. Kent quickly finds out the trouble he has put himself in as the suit contains an evil Icelandic curse that has Kent turning into a vicious monster with a thirst for the blood of children.

CLOWN has a somewhat interesting story behind it's production- It started as an original short film by Jon Watts and Christopher Ford who released the film online with the tag that the film was coming soon from Eli Roth. The short film created a buzz which caught Roth off guard as he was being contacted about his new film that he had no idea about. Curious, Roth watched the film, liked what he saw enough to contact Watt and Ford about adapting the film in to a feature that he would produce and the duo could write with Watt directing. And since you're reading this review you know that they jumped at the chance. The film was made announced and pulled and then sat around for a while until a limited edition to only 500 Blu-ray was released in the UK in early 2015. The film was finally released in the US in June of 2016, and is now available on Blu-ray. Was it worth the wait?

CLOWN will feel familiar as it follows a typical horror movie formula and has many of the tropes we're used to seeing but it doesn't let familiarity hold it back. First and foremost the cast is great. Andy Powers is excellent as Kent, showing some great comedic ability early on in the film while his dramatic side shows panic and dismay as the reality of his turn into a monster begins to become more apparent. Laura Allen owns the role of the distraught mother tasked with protecting her son from the monster her husband is changing into while fighting for the survival of the man she loves. It's a straight forward performance but she owns it. Peter Stormare's Karlsson is effectively cold and creepy but in a necessary way. These three make sure the film is believable.

Second the formulaic approach simply lets you sit back and enjoy. You may be able to predict a chain of events but watching the movie is just plain entertaining. The setup is well done and gives us an emotional link to hold on to and a reason to care about the fate of these characters. The middle drags a bit but it's all a set up for the excellent third act that is incredibly bloody and surprisingly suspenseful at times. The third act ended up being make or break for CLOWN and I'm happy to say it  was a success. CLOWN is also a success in its details. From the Karlsson's back story with the costume that is far from a storybook and is far closer to the dark side of fairy tales legends to the costume itself that has a genuine old world look to the design and finally the effects used with the clown including the rainbow blood he bleeds and the effects used whenever the clown monster is defeated. Those may seem like minor things but I think it adds an artistic level and production value that give CLOWN a leg up on other recent horror films.

There was a bit of a wait in seeing CLOWN and that can really hurt the anticipation for a film and leave many people feeling like they got the cold shoulder and lose interest in seeing the movie. CLOWN could have suffered that fate but luckily better late than never never became too late because this movie is quite good. Flawed and a bit slow in the middle but otherwise quite good.

The Audio & Video
As you'd expect from a modern production filmed in digital HD, the Blu-ray looks great. Anchor Bay gives CLOWN a sharp and crisp looking 2.40:1 anamorphic widescreen transfer that features a warm color palette and healthy skin tones. Black levels are deep and inky with no blocking. The English audio comes through a 5.1 DTS-HD Master Audio mix that is very clear and well balanced. Dialogue comes through perfectly with the score being complimentary and balanced nicely. The audio is free of any imperfections.

The Extras
Unfortunately the original short film is not included as an extra which doesn't make a whole lot of sense to me. There is a short Making-of featurette featuring some interview footage with Eli Roth and other key cast and crew members.

The Bottom Line
It's great that this film is finally getting released without any further delay because it really is a solid horror film with an original mythos, great performances and plenty of fun special effects.