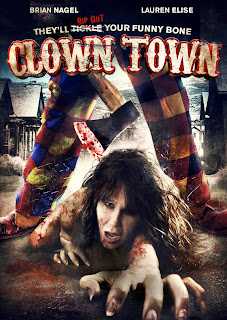 Four friends on their way to a concert get stranded in a small town that has been left mostly deserted after a train wreck caused most jobs to close up and most families to leave. The group is stalked by a gang of psychopaths dressed as clowns and fight to survive the night and escape the town.

CLOWNTOWN is one of several horror films featuring killer clowns being released in 2016 and will undoubtedly be compared to the rest, that's just how it goes. CLOWNTOWN uses a formulaic slasher film approach with almost as many villains as victims. The makeup design for the clowns are all distinct yet effectively simple and creepy while the "Baseball Clown" is the scariest clown since Pennywise. His look reminds me of a deranged crackhead child from Marilyn Manson and Dee Snider. The character design of the clowns is easily my favorite aspect of CLOWNTOWN. 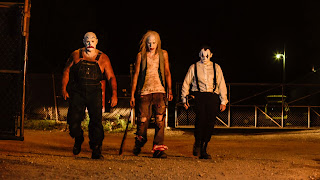 The film is marred by awkward editing and an ongoing feel of scenes reminiscent of the "meanwhile..." cutaways in comic books. It feels clunky and disjointed as our groups movements take massive leaps ahead without seeing any of it. It was a constant source of distraction for me as it took my attention away from the actual film and made me think about it each and every time it happened. The explanation of why these clowns do what they do was half assed and had no real reason behind it. I don't need everything explained to me in a horror film, a lot of the times the film is better off leaving the mystery but if the movie is going to give a reason behind motives of the killer or the evil forces or what have you then it better damn well make sense. The entire reasoning behind this was sort of like a little kid trying to lie his way out of trouble with his mom - Yeah, there's some reasoning there but none of it really ties together with what happened. 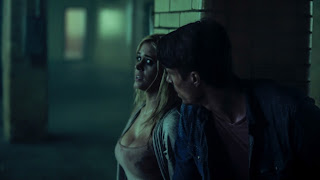 The cast needs to be mentioned as they are quite good and well above expectations for a small budget horror film. Brian Nagel is a great sympathetic lead as Brad who you will root for endlessly to survive so he can propose to his girlfriend played by Lauren Compton. Compton is beautiful and strong and more than capable of being the "final girl" type character even if she's not alone. Andrew Staton is hilarious in his comedic relief moments and equally as likable as his best friend Brad. And Greg Violand plays Frank, the homeless man who won't leave his hometown despite the danger of the clowns and helps the group try to escape no matter the cost. He's an honorable and stand up guy that you want to survive with the friends and find a way to better himself. He plays that honorable character to a T.

CLOWNTOWN was a picture I wrestled back and forth with as to how I felt about it. It's a messy film from a technical standpoint but it is also an entertaining affair with some great tense moments and truly scary clowns. It's a disappointment for me that the movie never truly comes together smoothly and feels almost episodic or that it was designed as a mini series of sorts which leads to an awkward viewing experience. Overall I'd consider CLOWNTOWN to be a middle of the road affair that ultimately lets down a wonderful cast and a couple other good things it had going for it.