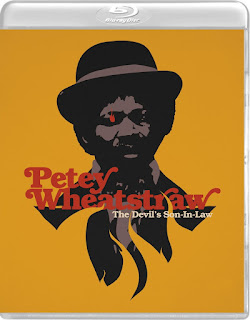 The Film
Rudy Ray Moore is Petey Wheatstraw, a hip hop rhyming comedian who don't take no shit and kicks ass with his kung-fu fighting. He has a new show opening up in a few weeks and his rivals Leroy and Skillet don't appreciate it him moving in on their business so they attack Petey and his friends leaving a lot of bodies in their wake. Willing to do anything to avenge his and his friends' death Petey makes a deal with the devil to marry his hideous daughter and become the devil's son-in-law for new life and a chance to take vengeance on Leroy and Skillet but when it comes time to pay Petey has no intentions on marrying that ugly demon woman.

PETEY WHEATSTRAW is the Rudy Ray Moore's third film in the Dolemite cycle of comedic kung-fu incfluenced blaxploitation films, this time director Cliff Roquemore (The Human Tornado) also writes the script, taking our beloved comedian in another direction adding a bit of supernatural elements and a bit of heartache as well. This new angle didn't perform as well as The Human Tornado at the box office but that doesn't mean it wasn't a hugely entertaining and frankly pretty well made piece of low budget filmmaking. 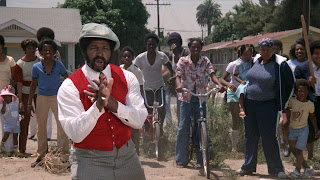 Rudy Ray Moore once again lights up the screen with his beautifully tailored striped suits, wise cracking rhyming dialogue and his cocky smile. The man had a natural presence that just plain works for these types of movies. He new how to ham it up just enough so that it was a bit campy and silly but not corny. Jimmy Lynch co-stars as Petey's right hand man and plays a bit more of a straight man character and is excellent in that role. It's appropriate he's given the most emotional scenes to carry and he does so with great success. While Moore plays our hero and Lynch is the straight man, both doing so to near perfection it is the comedic duo of Leroy and Skillet (Sanford & Son) who are the comedic backbone of the film and they had me rolling with laughter. Their bigger than life personalities match their large bulbous shapes often covered in flashy brightly colored suits. They have a natural chemistry not unlike Abbot and Costello and I love every second they're on screen.

I pretty much love every second of PETEY WHEATSTRAW in general. It's cheaply made, it only takes one look at Lucipher's cane which is essentially half a pool cure with a plastic gem on top to see the budgetary constraints, but Cliff Roquemore gives the characters and sets interesting and stylish enough looks that you never focus on the shortcomings they faced. One of the more expensive sequences of the film was probably when a pickup truck full of watermelons explodes (only the fruit, not the truck, be reasonable). That was probably a few hundred dollars in fruit but the laughs it provides are well worth it the cost. It wouldn't surprise me if the crew had to find the scraps of watermelon around for lunch that day - I'm only kidding of course. 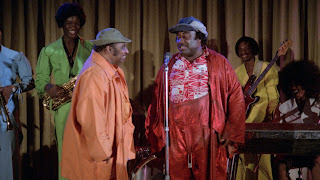 The special effects of the film are minimal but effective consisting of basic camera tricks, some squib packs and questionable but oddly effective FX makeup and plastic devil horns but then that sort of describes the entire Dolemite series and it just plain works for these movies. Unfortunately this would be Cliff Roquemore's last directing credit on a feature film. He would direct Rudy Ray Moore's live stand up special from 1982 called Rude but this would be the end for his feature films. Roquemore would direct numerous stage productions but I feel he never got the chance he deserved to add more to the world of film. Perhaps it was due to the risk of changing the Dolemite formula just a bit and not having it pay off at the box office but it only takes a single viewing to see that Roquemore could direct a great film on a budget and write a damn entertaining screenplay. Luckily Roqumore was brought back to help write the fourth Rudy Ray Moore film, The Disco Godfather.

The Audio & Video
PETEY WHEATSTRAW looks absolutely stunning on this Blu-ray from Vinegar Syndrome that features a brand new 2K scan and restoration from the original 35mm camera negative. The very sharp image gives way to colors that are vivid with deep black levels that have no crush or problems with blocking. The very strong detail gives life to textures and surfaces from the thread of clothing to a velvet sofa or brick exteriors. They all look as though you can reach out and touch the smooth velvet or rough brick. There is a healthy grain structure that looks natural and there's only a very light amount of speckling in the anamorphic widescreen (16x9) transfer. The DTS-HD Master Audio sounds crystal clear with no background noise, popping, crackling or other annoying distortions. This mix faithfully recreates the film's original mix and ups the quality to modern day specifications. The levels are mixed skillfully letting the soundtrack compliment dialogue without ever overpowering it. English subtitles are included. 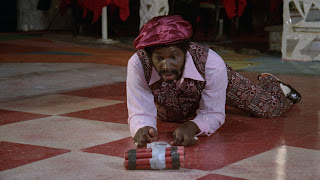 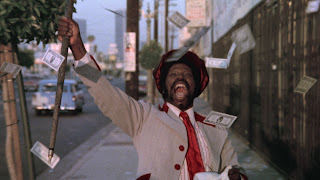 The Bottom Line
PETEY WHEATSTRAW is a blast and if you don't check this out you'll find a boot up ya ass!