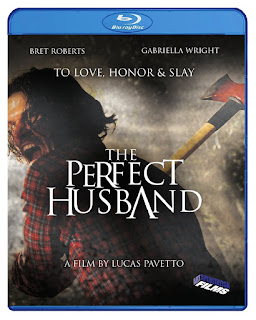 The Film
Nicola and Viola are recovering from a miscarriage of their first child and decide to take a trip to a family cabin in the woods to rekindle the flame of their marriage and work through some issues but the weekend quickly turns into a violent, paranoid blood rage that will leave both husband and wife fighting for their life.

THE PERFECT HUSBAND is my first exposure to Italian filmmaker Lucas Pavetto and I hope I run into his work again soon if it's up to par with THE PERFECT HUSBAND. The film is in English and the production features actors from English speaking backgrounds but it is quickly apparent that Pavetto's first language isn't English. While there's no major issues with dialogue there are little things throughout that just don't sound like how native English speakers would talk. It's not a major issue however, and that is one of my biggest problems with the movie. Otherwise I think the acting is very good with strong performances from both Gabriella Wright and Bret Roberts. Roberts giving an especially raw performance that channels his inner Jack Nicholson from The Shining.

There's actually quite a few things that remind me of Stanley Kubrick's classic film that was adapted from a Stephen King novel. Lucas Pavetto's use of a secluded setting to isolate a couple that isn't in the best mental state, all the way down to Nicola's wardrobe and appearance consisting of a plaid shirt, disheveled hair all while creating mayhem with an axe. The strong psychological element is also present however in a different way.

THE PERFECT HUSBAND is a violent film, with lots of blood spraying around and thankfully the majority of the effects are practical. There was only one moment that stood out as poorly rendered CGI blood. At times it can be an uneasy viewing experience from several viewpoints. On top of the bloody violence there's also rape, physical abuse that doesn't hold back and the broken psyche of a couple on the edge of a total breakdown. Throughout the majority of the film there's never a true protagonist as both Nicola and Viola have plenty of moments where the audience is given plenty of reason to find them quite unlikeable and at fault for at least some of the problems this marriage is faced with. Then the finale hits and reveals the truth which sort of flips the film on its head. I found the ending to be a bit hamfisted and clunky, perhaps on future viewings knowing it is coming would make it a bit smoother but on this first time viewing it hits like a bout of turbulence in an airplane - It comes out of nowhere, it's shaky and thankfully it didn't ruin the journey. It works but it could have been much smoother.

The Audio & Video
The Blu-ray from Artsploitation Films is gorgeous. The 2.35:1 anamorphic widescreen ratio transfer is sharp with vivid colors, including deep crimson reds and inky blacks. Detail is strong in everything from textures of clothing to surfaces such as the wood in the cabin or the rough rocks at a waterfall. There's no damage or excessive DNR to this very nice looking disc. The English audio is handled with a 5.1 surround sound mix that has a sparkling crystal clear mix. Dialogue and music never compete for the foreground as they compliment each other as they should. The audio is free of distracting background noise or any distortions.

The Extras
Extra features include the original short film, a behind the scenes featurette and a selection of trailers.

The Bottom Line
THE PERFECT HUSBAND is well made, bloody violent and carried by great performances. Well worth your time.