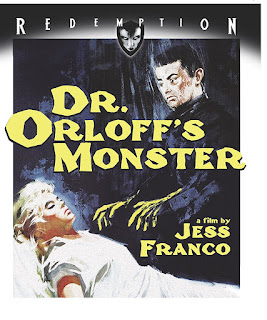 The Film
DR. ORLOFF'S MONSTER aka The Secret Of Dr. Orloff or the more racy and perhaps confusing The Mistresses Of Dr. Jekyll, showcases the things I love about Jess Franco films and the shortcomings he has been known to have all in one 84 minute film. Though it is a sequel to 1961's The Awful Dr. Orlof it is only loosely connected. The plot concerns Melissa, a young college student visiting her aunt and uncle to settle the inheritance of her recently deceased father. Unbeknownst to her, her uncle has been working on an experiment to create a zombie like killer. Local police investigate the deaths while Melissa searches for answers into her father's death.

Jess Franco had a shoestring budget to work with during the production of DR. ORLOFF'S MONSTER, small enough that various cast and crew received no pay for their work and Hugo Blanco was tasked with creating his own monster makeup. The look, that of a scaly, and possibly burned and blistered man, is simple yet effective and surprisingly well done by Blanco. Blanco's character sort of wraps up the production into one single character - effective despite it's faults. Franco makes the most out of some really nice looking locations, including the castle which he makes sure to show off as much as possible with his framing choices. I don't blame him one bit for getting every ounce of value out of it. A lot of time is also spent inside a jazz club, something these early Franco films are known for and frankly I feel many of these scenes are there to pad the film's runtime.

I think some of Jess Franco's best work are the early black and white horror films he crafted during the early to mid 1960s and though DR. ORLOFF'S MONSTER isn't the cream of that crop it does have a good gothic atmosphere, an interesting if familiar mad scientists plot and a creepy monster and ends up being an enjoyable creepy little mystery.

The Audio & Video
Kino has released the latest entry into the Redemption Films with a new HD presentation giving the film previously unseen levels of detail and clarity on home video. While this is not a full restoration and there are still some rough spots in the source material with plenty of dirt and debris speckling the picture the high definition quality is never in question. Detail levels are strong especially in close ups. The monster's burned and blistered face makeup shows this more than anything else perhaps. The black and white photography has a great stark look with beautiful greys and deep blacks.

There are two audio choices, with French and English options both in DTS-HD 2.0 formats. Having listened to both tracks I found the English to be the track to listen to. Not only is it a crisper and clearer listening experience, as the French track has more issues with imperfections and background noise, the English dialogue simply presents the story and dialogue better and clearer. There are optional English subtitles available.

The Bottom Line
DR. ORLOFF'S MONSTER is an imperfect beast but it has many of the touches and flourishes that make these early Jess Franco horror films desirable and among his best work. Gothic horror fans should take note of this release. Recommended.