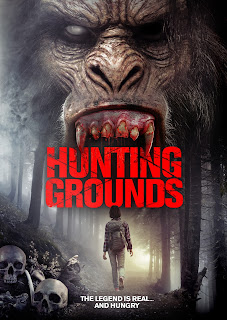 Recently widowed Roger (Jason Vail) and his son Mark (Miles Joris-Peyrafitte) retreat to his brother-in-law's remote cabin deep in the woods after losing their home. There, when they are visited by two friends for a weekend hunting expedition, they discover that they are not the only ones living there. A group of Sasquatch also call the woods their home and are on the offensive since a logging company began destroying it. 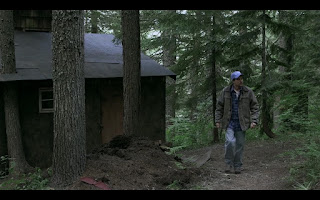 I love Bigfoot movies, but I'll be the first to admit that most of them are complete and utter trash. There are definitely more than a few gems in this sub-genre, but before you can get to them you have to dig through a whole lot of garbage. HUNTING GROUNDS falls somewhere in the middle of those two extremes. The story mostly seems to focus on the meek Mark and his tenuous relationship with his father since his mom passed away. His father is battling with depression and possibly alcoholism which is enabled by his arrogant buddy Sergio (David Saucedo). Mark's uncle, Will (D'Angelo Midili), is on the opposite side of the spectrum, trying to help Mark put himself into a better situation rather than letting his father's self-destructive behavior drag him down as well. Most of the first half of the movie deals with this dynamic, which tends to make it drag a bit. All of the actors do a fine job with the material, but it just wasn't particularly the movie I was looking forward to. 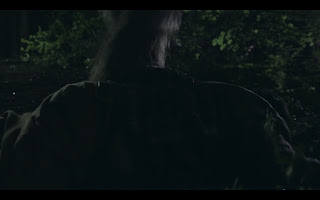 About halfway through the movie, the bigfoot action really starts to ramp up and this is where the movie does what it does best. A lot of recent bigfoot movies have been CGI-heavy, and I really appreciate the fact that HUNTING GROUNDS is not. The effects are nothing incredible, but are used extremely well in a way that never feels silly. The movie never feels like it's trying to hide it's creatures either. Though they are in shadow a lot, we see enough that we never feel cheated. As the group fends off the group of sasquatch, the movie builds to a pretty tense climax. Unfortunately, I think the ending kind of drops the ball and leaves the viewer with a conclusion that feels unsatisfactory and rushed. 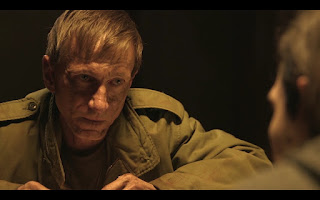 When all is said and done, I feel like HUNTING GROUNDS is a solid film that's probably worth checking out if you're a bigfoot movie enthusiast like me. But if you're just looking for a fun creature feature, you might do better with something else.

Posted by Celluloid Terror (Seth Poulin) at 9:11 AM