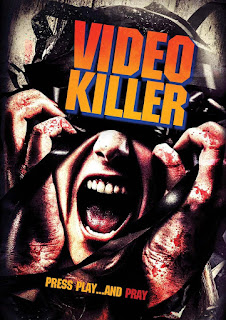 The Film
After a series of strange knocks at her front door at the same time each day Amy receives a strange video tape featuring strange violent animations and a figure that is stalking her. Soon she realizes that she isn't the only person dealing with this and sets out to find the other victims in an effort to find out who is stalking and killing them.

Haunted video tapes have been a plot device in horror films for years, from The Ring series that was probably the peak of the subgenre to the more recent films that sometimes combine the idea with the found footage style to set up a plot that is rather inexpensive to produce. VIDEO KILLER falls into that category despite not being a full on found footage movie it does use the style along with traditional film making styles. The idea is to keep production costs down while creating a viable horror film setup. In that way VIDEO KILLER is most definitely successful because most of the scares involve doors opening on their own, flashes of creepy figures and other terrors that we only see the victims running away from. 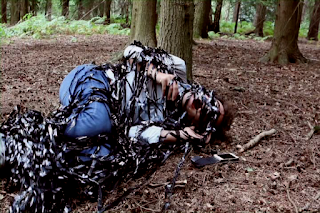 The best moment of VIDEO KILLER is a nightmare moment when one of the victims hallucinates that he is being attacked by the ribbon from a VHS in the woods. I don't think I've seen something so unintentionally funny as a pile of film slithering along the ground while a man writhes in terror until it wraps around him, consuming him in fear until he awakens. I'd almost go as far to say VIDEO KILLER is worth watching for this sequence alone. Alas, it is not. VIDEO KILLER isn't a terrible production, the few cast members are actually fairly decent and there's moments where the direction is solid but there's just nothing to keep your attention. The same fleeting moments of suspense and horror are repeated and there's too many moments that come off as comedic. I liked the animation sequences featured on the haunted VHS tapes more than almost anything else and that should say something.

The Audio & Video
Wild Eye Releasing's DVD of VIDEO KILLER features an anamorphic widescreen transfer that is very attractive. Colors are warm and the picture has good clarity. Black levels are deep with no blocking issues while the English 2.0 audio mix is clear and has stable levels that don't fluctuate. There's no damage imperfections in how the audio is portrayed. 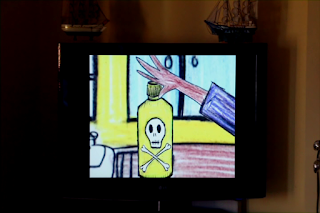 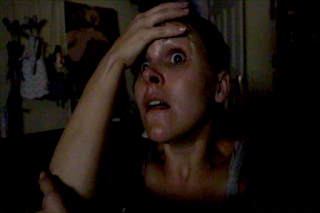 The Bottom Line
VIDEO KILLER is another in a line of films centered around haunted video tapes. The sooner this trend in the genre fades away the better.

VIDEO KILLER is available HERE
Posted by Celluloid Terror (Seth Poulin) at 9:22 AM