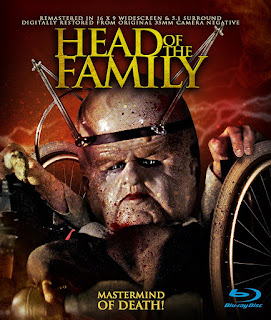 The Film
Loretta is having an affair with Lance and they're looking for a way to knock off Loretta's husband Howard who is the toughest guy in town. When they spot the local family of weirdos disposing of a body from their truck they get an idea to enter into business with the Stackpools but then Lance finds out their secret that they're quadruplets with one specific human trait each including super strength, incredible beauty, highly sensitive senses and massive intelligence. The smart one is the leader of the group, a massive cranium with a tiny body rolling around in a wheel chair... this is only the beginning of the weirdness.

HEAD OF THE FAMILY is a total oddball science fiction horror film steeped in dark comedy. It is easily one of Full Moon's best productions. The script is strong and well written with genuinely funny moments along with a likable pair of protagonists in Lance and Loretta. Jacqueline Lovell is gorgeous and adds the sex appeal by frequently shedding her clothes. She's also quite good as the damsel in distress type character during a forced performance as Joan of Arc by Myron, the head of the Stackpool family.

Myron is such a well designed villain, as is the rest of the family, but Myron is easily the star of the show here. His giant bulbous cranium is an excellent makeup job and the performance from J.W. Perra is quite aristocratic and domineering with his massive brain power. His control over the rest of the family is an interesting dynamic and the way it all plays out isn't overly original but it is a wildly entertaining love letter to oddball sci-fi horror flicks of the 50s. It's an absolute shame that the long rumored sequel Bride Of The Head Of The Family never came to fruition.

The Audio & Video
Full Moon's foray into Blu-ray continues to be mostly a success as HEAD OF THE FAMILY looks and sounds quite good. The anamorphic widescreen transfer has a nice sharpness and natural color scheme. There's a thin but healthy grain structure and very little dirt or debris. Black levels are deep and there's no signs of edge enhancement or DNR. English audio options include 5.1 and 2.0 HD options that are mixed skillfully and sound crisp and clear. There's no distortions or background noise. The film doesn't have a lot going on to really give either mix a work out but it is very pleasing to the ear and that's all I need for this movie.

The Extras
-Audio Commentary with actor J.W. Perra
-Bride Of The Head Of The Family Promo
-Original Trailer

The Bottom Line
HEAD OF THE FAMILY is an absolute B-movie blast and one of Full Moon's crowning achievements. Highly recommended!

HEAD OF THE FAMILY is available HERE
Posted by Celluloid Terror (Seth Poulin) at 8:39 AM