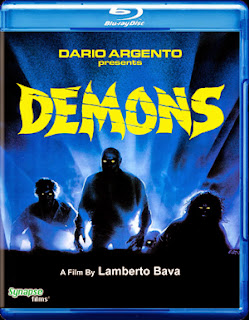 The Films
The DEMONS legacy starts with a theater full of people viewing a strange horror film when one of the audience members begins to transform into a demon after being cut by a cursed prop from the film. Her nasty transformation quickly turns into a violent blood thirst as she attacks the other patrons who find that the theater is totally enclosed and there is no way out. The survivors band together to fight the demons in hopes of find an escape. Then in part 2, years after the demons ran rampant on the world and people fought for survival and exterminated the monsters they're back when the cursed film plays across TV screens in a high rise apartment building coming out of the TV itself before terrorizing a birthday party and a health spa.

The DEMONS films (not counting the unofficial sequels that reached as high as part 6 if you look at some films' alternate titles) are a pair of movies that purely exemplify their time and place in horror movie history. They're perfectly cheesy, over the top 80s gore fests oozing with sloppy, gooey violence. Many Italian horror fans have mentioned that they would have loved to see a Dario Argento zombie film but these films are pretty much what you'd get. Argento co-wrote and produced both films and Lamberto Bava was his protege for many years. Argento's influence is all over these movies (and so are his daughters as Fiore appears in the first and Asia appears in the second).

DEMONS is simply a horror classic, damn near bordering on masterpiece. It is fucking terrific in every way. DEMONS 2 is a step back, as many sequels are but remains a damn good and immensely entertaining movie with its recycling of Bobby Rhodes who moves on from a pimp in the first film to a personal trainer in the sequel and is a fucking badass in both and Brit Pop soundtrack that is a noticeable detour (but one that works) from the heavy metal soundtrack that drives the first film. My love for these movies is immense and if you've never seen them then I beg you to stop wasting your time and get to it!

The Audio & Video
Give Synapse Films the home video crown. These Blu-rays are about as perfect as perfect gets when it comes to 30 year old Italian horror films. I don't see how they could look better. The 1.66:1 anamorphic widescreen transfers are gorgeous with intense sharpness, perfectly vivid color reproduction and extremely clean and beautifully restored prints. The audio options included on these Blu-rays are English only, so the Italian options included on the limited special editions aren't available but the English track is the way to go in my opinion. The tracks are crystal clear, with no distortions, audible hiccups or background noise. The mix in tracks is spot on as well. 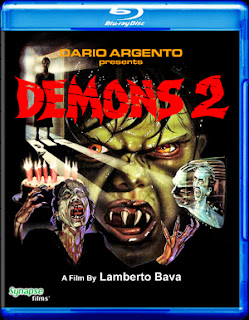 The Extras
These "movie only" editions only include a trailer for their respective film. The limited edition Steelbook releases are beyond packed for the DEMONS enthusiast.

The Bottom Line
After fans clamored for a more affordable option for the more casual DEMONS fan, Synapse comes through with these standard edition releases that still blow many Blu-rays that are heavier with special features out of the water. If you don't want to spend the premium price for the premium limited edition releases then these versions provide you with the same incredible A/V quality for the films (which is the most important part!). I highly suggest you jump on these releases (and even more so the limited edition Steelbooks for all that's good here plus hours and hours of bonus features) because they're great movies with absolutely stellar releases.

Posted by Celluloid Terror (Seth Poulin) at 10:44 AM