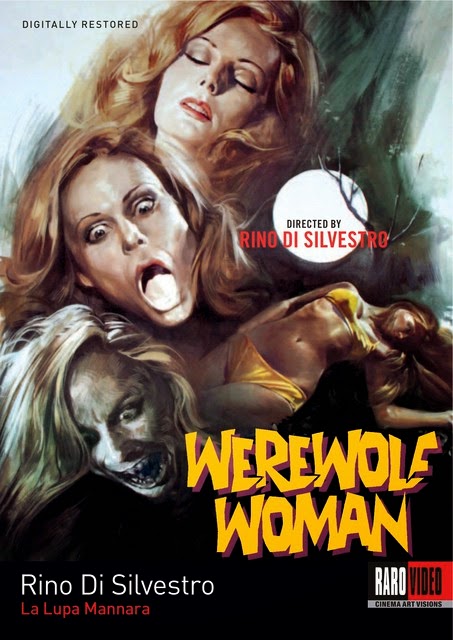 The Film
After being raped, a woman secludes herself in her family's countryside estate where she becomes obsessed with a family myth that her relative had been a werewolf several generations earlier. It doesn't help that the supposed werewolf looks identical to the woman and her fractured mind allows this obsession to consume her and lead to numerous murderous encounters with men and anyone she encounters on the night of a full moon.

WEREWOLF WOMAN is a unique take on werewolf movies. There are some bizarre sequences with lycantrhopes that feature some makeup effects that on the surface don't look very good but somehow work for the bizarre scenario they're a part of but this is film is driven more by the madness of a woman with a psycho-sexual disorder, than by silver bullets and wolf men. I knew very little about this movie going in to it so all I could hope for was to be a fan of it and I immediately found myself enjoying what I was watching. The acting and writing are solid which isn't always the case in bizarre horror productions of the 1970s. There's an understated score that adds to the film without having to make itself the star of any particular area and there's a good bit of nudity and blood flowing as well.

The film takes a bit of an awkward turn during the final act where it suddenly loses all of its personality and becomes every bit of a rape/revenge film ala I Spit On Your Grave. The shift in tone is a bit jarring and while it does eventually lead back to the film's true tone for the finale the film never quite recovers from it, not giving the viewer enough time to digest what just happened or why. It doesn't make WEREWOLF WOMAN a bad film, not by any stretch, but it does knock it down a notch.

The Audio & Video
Raro Video's 16x9 anamorphic widescreen transfer is very nice. The picture has a good sharpness to it with high levels of detail in surfaces, textures and close ups of actors. Skin tones are natural and not at all waxy. There's no overuse of DNR and no edge enhancement noticeable. The audio comes in a 2.0 Italian track with English subtitles. The audio is crisp and clear, free of any distracting background noise or imperfections. It features a good mix between dialogue and the score. The English subtitles are perfectly timed and seem to be translated nicely as they read quite naturally.

The Bottom Line
I highly recommend WEREWOLF WOMAN for fans off slightly offbeat but fully exploitative and raunchy horror films.