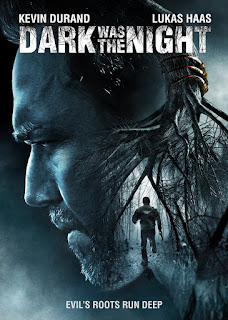 The Film
After a logging company clears out a section of woods in the town of Maiden Woods a strange and violent series of events start to occur from an unseen force. The two sheriffs must protect the town from this monstrous attack while dealing with their own personal demons.

DARK WAS THE NIGHT is a really well made film full of great performances from the lead Kevin Durand (The Strain) to supporting actors like Nick Damici (Stake Land, Late Phases). Director Jack Heller handles the personal drama that each character faces without turning it into eye-rolling soap opera fare. He blends that in to add into the horrors the town is facing as animals disappear, bloody corpses are found strewn around the woods and strange footprints are seen throughout the town to make a film in which we care about everybody we come across. We want the town of Maiden Woods to survive and that's incredibly important.

To say DARK WAS THE NIGHT is a slow burn would be correct, we don't see much of the monsters at all until the film's finale and before that there's only a handful of gruesome moments but this is a character driven film that works so damn well we know the payoff is coming and that we'll get our horror fix before the end. Until then we have a group of characters we instantly cared about facing some sort of unknown foe. And then shit starts getting really bad for the town, they decide to hole up in the town's church together to wait out a snowstorm as the attacks are getting worse. Here comes the payoff! 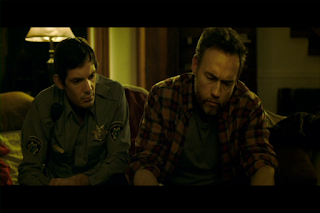 And then we get the money shot, we see the monster in all of its... erm... glory. Its Syfy channel CGI dreck glory. I can't overstate my disappointment in what I saw, this poorly rendered, green, scaly, rocky, lump of shit. The film that I was so fully on board with as a horror film driven by characters and sight unseen scares that upped the tension for this showdown took a jump off the high dive into a pool of bullshit. After the reveal I was so let down that I was taken completely out of the movie for the remainder.

Until the final groan inducing little twist at the end. DARK WAS THE NIGHT was right there, potential to be a really really good horror film that didn't rely on blood and guts or tits and ass to grab the audience's attention. Common real life drama pushed the film forward and then when the film needs the horror movie payoff to pull it all together and make it a successful horror film it fails us.

The Audio & Video
The DVD from Image/RLJ Entertainment looks solid top to bottom. The film's color palette is heavy on grey and blue hues to add to the cold and distant feeling of the upstate New York town. The 2.40:1 anamorphic widescreen transfer is clean and sharp for a standard definition release. There is a Best Buy exclusive Blu-ray that I'm sure looks even better. The Dolby Digital 5.1 surround sound audio track has a well done mix job and there's no background noise or distractions such as popping or crackling. 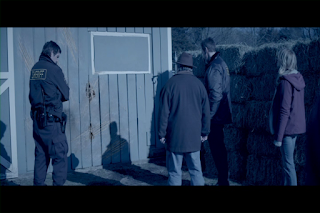 The Extras
-Behind the scenes: A Trip To Maiden Woods
-Q & A with the cast 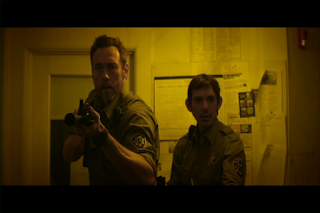 The Bottom Line
DARK WAS THE NIGHT is like that deep fly ball in the bottom of the ninth with a full count and the bases loaded when your team is down by 3 that gets caught on the warning track. The whole thing builds this fantastic drama and story and you're waiting for that huge dramatic payoff and when it comes up just short it's incredibly deflating.

DARK WAS THE NIGHT is available HERE
Posted by Celluloid Terror (Seth Poulin) at 4:51 PM