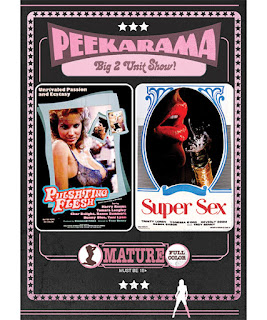 The Films
SUPER SEX follows the dirty goings on at a Psychiatrist office when a younger doctor fills in for the older experienced head of the practice and has some new methods to try out on the ladies who come to him with sexual hangups. He even lets his (obviously quite attractive) secretary help out! Everything could fall apart when he's interrupted by the old doctor until he joins in as well and is a full on supporter of the method!

There's not much sleazier in the medical field than taking advantage of your patients in a sexual manner and that is what this film is all about! The film never leaves the not-so-safe confines of the doctor's office but where else would we rather be with such hot action going on? It may be too much for the old uptight secretary but for everyone else it's time to play! And who are we to judge a doctor's methods if they work, right?

Then it's time for Superman... I mean Supersperm... well, it's time for PULSATING FLESH which chronicles the character Peter Longfellow, a man hired to impregnate women who may otherwise be barren. You see, Peter's seed is so strong that he can impregnate ladies who are even on the pill. He can do two at once too. And for a small fee you can sample his work! 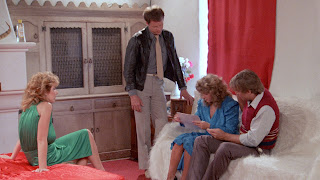 This movie is a blast (pun fully intended)! It's a silly adult romp filled with attractive women, a variety of situations and scenarios, including one where a live interview with Mr. Longfellow leads to him fucking and impregnating the host in front of a live audience! A live audience with children present, mind you. What kind of parents bring their kids to a raunchy sex seminar? I guess everyone, regardless of age, needs to know of the great and powerful Peter Longfellow! Who am I to judge? There's some funny moments in here, including the host's reaction after Peter was finished with her which gave me a good belly laugh.

SUPER SEX will get you warmed up and then PULSATING FLESH will come in as the main event and proves to be quite the enjoyable film.

The Audio & Video
Both films have been restored with 2K scans from the original 35mm camera negative by Vinegar Syndrome and it is obvious the negatives have been kept in good condition as each film looks fabulous. The 1.85:1 anamorphic widescreen transfers are squeaky clean and quite sharp for a DVD presentation. Colors are strong and skin tones fleshy and healthy. The 2.0 audio tracks are nothing special but have well done mixing and handle the job with ease and without any complaints. 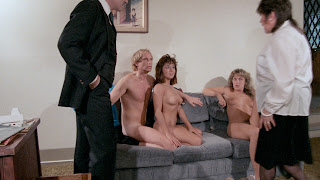 The Extras
A theatrical trailer is included for each film 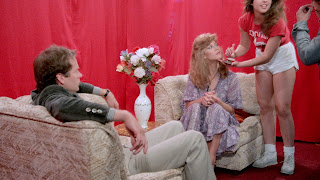 The Bottom Line
A lighthearted duo of adult films from Carlos Tobalina that still ramp up the kink factor just enough to keep it extra juice. Recommended.