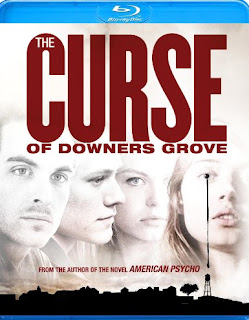 The Film
The town of Downer's Grove has had an unlucky streak of a high school senior dying the week before graduation for the passed several years. With graduation quickly approaching Chrissie (Bella Heathcote) begins to think the curse may be upon her after a series of disturbing events have rained down on her in recent days.

The synopsis of the film sounds like a horror film, potentially of the supernatural genre, but instead we get a largely real world based thriller that is driven by the terrible things that can go on in the life of a high school or college student. The problem is that the curse is mentioned throughout the film but only in passing most of the time. It is brought up enough that we are well aware that it is meant to be a plot point but it's never played up as a real big deal and ends up being totally pointless.

The acting is spotty and uneven at best and Tom Arnold at worse. Yes, that Tom Arnold, former husband to Roseanne. He's on screen for a handful of scenes and is fucking awful in each one. The word "abhorrent" immediately comes to mind. Please stop, Tom Arnold, for the love of God. The script is as uneven as the acting and the voiceover work that only occurs at the very beginning and very end serves no purpose, nor do the visions that Chrissie sees throughout the film which serve as the only real reason to believe there may be any sort of supernatural or curse element.

The editing is atrocious, at times making it seem like there are missing frames. The rest of the movie is a pedestrian affair at its best and a waste of time at its worst.

The Audio & Video
Anchor Bay gives us a rock solid Blu-ray presentation with a 2.40:1 anamorphic widescreen transfer that is very sharp and has a high detail level. Colors are strong and skin tones are natural and healthy looking without any sign of excessive DNR. The English audio is handled with a Dolby TrueHD 5.1 surround track that sounds beautiful and crisp. There's no damage or background noise and the mix job is very well done.

The Bottom Line
Skip it.

THE CURSE OF DOWNER'S GROVE is available HERE
Posted by Celluloid Terror (Seth Poulin) at 4:33 PM