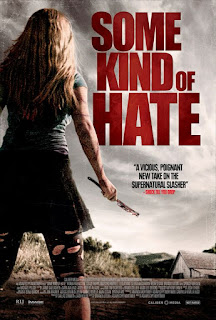 Lincoln is sent to a camp after he retaliates against his bullies. The camp is for troubled teens with various issues to work out in a friendly and healthy environment. Shortly after arriving Lincoln's problems find him again as a group of more popular kids heard about his fight and decide they want to test him and see if they can push him to his limit. As stuff gets worse for Lincoln he makes a wish that they were dead and a vengeful spirit with ties to the camp will help his wish come true whether he likes it or not.

I'll start off with this - I think the basic idea of SOME KIND OF HATE could have worked had the writing been better. Bullies and their victims are a hot topic these days and it is no surprise that they've become a popular plot device in movies as well. While a paranormal horror thriller isn't exactly the first place my mind goes when I think of a bully/victim plot device I can see where it would work. Or at least be interesting.

But it doesn't work, and it really isn't interesting. At least not here, as the twist is painfully obvious. Every character in this movie is a horrible cliche. That even includes the kid that sort of looks like a skinhead complete with an iron cross tattoo on his neck but he's friends with a couple of stereotypical black kids. That's one that didn't make sense to me. Moving on, there's the popular girl who can't deal with it and cuts, the death metal fan who is bullied and is basically plucked straight out of the Columbine massacre, a nerdy hacker, and so on. Every character is one note and the adults in charge who are total worthless shitbags of human beings might not even be a full note. They're so sparsely seen that they may as well not even be around. Except for the Yoga instructor to have a lingerie scene with one of the teens because that is totally believable.

At 82 minutes long (and really only about 75 when you take out the end credits) SOME KIND OF HATE should have at least been a quick and easy one despite my feelings towards it but it wasn't. As soon as the ghost enters the scene the movie comes to a screeching halt and takes a small step forward to the finish every few minutes but every step is exactly the same as the one before- Angry ghost picks out a camper, hurts itself to kill the camper, Lincoln finds them and freaks out, repeat.

I'm glad I wasn't a victim of bullying and decided to watch this movie because the caricature that it paints teens with problems as is shitty and would probably make me feel worse about myself. Everybody in this movie gets lumped into some sort of broad stereotype and has to live it out to the fullest. Not only is it shameful, it's also poorly executed plain and simple.
Posted by Celluloid Terror (Seth Poulin) at 6:19 PM