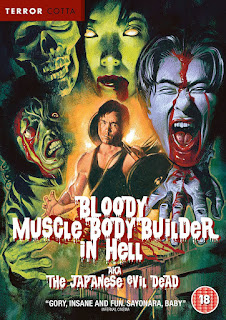 Sam Raimi found horror immortality in 1981 when he made The Evil Dead and then the sequel six years later. The original film was a rag tag amateur production full of heart, soul and some brilliant ingenuity. Bruce Campbell starred and proved to be a capable leading man in this downright terrifying movie filled with some really well done special effects, stop motion photography and a healthy dose of gore. The sequel went for broke when it took what the original created and added in a Three Stooges sense of humor filled with slapstick comedy, and even better special effects and gallons of blood and gore. This is where Raimi would become a household name in horror and Bruce Campbell reached his full potential as the film simply wouldn't be the same without his portrayal of Ash. Then the series took a turn towards fantasy horror and comedy with 1992's Army Of Darkness. The Evil Dead trilogy has had a lasting impact with a remake in 2013 and a TV series that is currently  preparing for its third season. It goes without saying that The Evil Dead is a beloved piece of American horror but what about Japan? A country with their own rich tradition of horror films. Well, back in the 90s Shinichi Fukazawa set off on a journey that would span parts of three decades to complete. A project that can only be described as a labor of love. And perhaps the biggest love letter to Sam Raimi's classic that the world will ever be lucky enough to see. 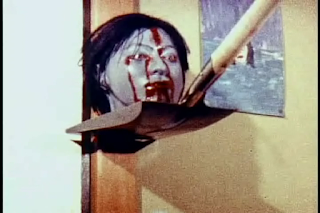 Shinichi Fukazawa's lone filmmaking credit is BLOODY MUSCLE BODY BUILDER IN HELL which he wrote and directed and stars in. It will likely be the only credit he ever has but what a legacy to leave behind - perhaps the greatest foreign fan film ever. That really is what BLOODY MUSCLE BODY BUILDER IN HELL comes down to and there's not a damn thing wrong with it. 30 years after his father murder's an ex-girlfriend in self defense and buries her in the floorboards of his home, Naoto enters the house for the first time with his photojournalist ex-girlfriend who has brought along a psychic to help her get pictures of ghosts. The angry spirit of the slaughtered woman possesses the body of the psychic through a necklace that absorbed her blood and is now forced down the psychic's throat. Now Naoto and his ex-girlfriend must fight the evil with guidance from his dead father who communicates with them through an old TV and what ensues is 62 minutes of absolute madness. 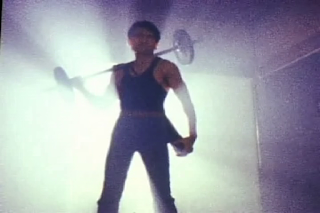 BLOODY MUSCLE BODY BUILDER IN HELL is short and it should be. Once the story (what little their is) is set up we go head first in to gory, stop motion, splatter hell. Eyes are popped, limbs are hacked, heads are lopped off and shotgunned into smithereens. You'll see the same slop that your high school called spaghetti and you'll see an absolutely disgusting attempt at sucking out the evil like it was a snake bite. Admittedly I was totally surprised at the quality of the special effects in this movie which you can tell is where probably 90% of the budget went. The movie is almost entirely spent within the confines of a house with boarded up windows that the group can't escape until they properly hack up and destroy the psychic's body with the correct weapon. It doesn't count if Naoto isn't using the correct weapon. Does that make any sense? Fuck no but it doesn't matter. This movie doesn't exist in the same plane of reality as normal things that make sense. 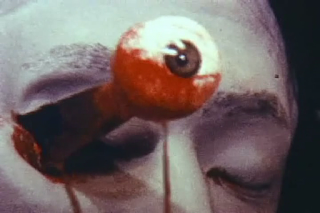 The similarities to The Evil Dead don't stop at the special effects and horror side of things. Shinichi Fukazawa bares a striking resemblance to Bruce Campbell. It's almost scary in its own right. He doesn't quite have the same trademark chin that Bruce does but Shinichi does his best to stick out what chin he has to enlarge it for the camera. Fukazawa would definitely win a Japanese cosplay contest for Bruce Campbell. He even makes sure to take Ash's trademark "groovy" and make it his own, along with his exclamation of "Now I am pumped up!" Fukazawa may not have the acting chops or comedic timing that Campbell has but he does a serviceable and commendable job. 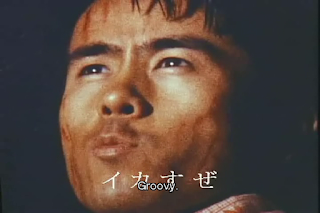 The thing missing from BLOODY MUSCLE BODY BUILDER IN HELL is the zany, one hundred miles per hour feeling of a carnival madhouse on LSD that The Evil Dead 2 has. Fukazawa tries to get the slapstick and comedic aspects into the film and he gets an A for effort but that isn't something you can fake, it either works organically or it doesn't and while it doesn't hurt the movie, it doesn't have the impact that it does in ED2. I love that they went for it though because it is definitely a campy, bloody, low budget romp but it lacks that zaniness. But I have to ask myself if it even matters. And I immediately conclude that no, it doesn't matter. BLOODY MUSCLE BODY BUILDER IN HELL is over 14 years of work and love in a basement finally unleashed on the world and it will suck you in to a world of trash cinema destined for cult classic status as soon as people get a chance to see it. And you need to see it.
Posted by Celluloid Terror (Seth Poulin) at 7:09 AM