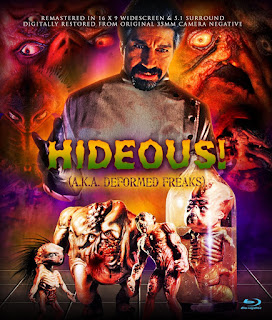 The Film
When Dr. Lorca acquires the new pride and joy of his medical oddity collection, a mutant born from toxic waste, the monster's "rightful owner" comes looking for him and what ensues is a battle of wealthy oddballs fighting over an army of angry mutant creatures all while trapped inside a mansion.

The opening scene of HIDEOUS felt like something new and different than the Full Moon film's I've come to know. A crew of sewage workers are cleaning some sort of massive tank for anything that shouldn't be in there- trash, money, bodies, etc... It's when they find a gross, slime covered organic being that is living and the real plot of the movie begins. The opening felt raw, and I imagined the film to be headed to the city streets in some fashion, an area totally foreign to Full Moon films. Seeing these monsters run amok in a gritty urban setting regardless of what plot wrapped around it would have been fun and fresh. Unfortunately as soon as the monster is found we head back to familiar territory and the movie instantly looks and feels like a Charles Band production, complete with a score from his Brother Richard which doesn't particularly fit the tone of the movie.

To this point I'm faulting HIDEOUS for what it is not instead of focusing on what it is and that is because the film is an absolute bore for most of the first two acts. Aside from a totally silly scene involving a topless woman in a gorilla mask there's not much going on besides a pair of wealthy men arguing about who is more deserving of this new creature and their various employees and partners running around doing their bidding. Eventually everyone ends up locked inside a mansion and the critters take a bit of revenge on them all in an extremely unsatisfying fashion with perhaps the best scene being one of the mutants sticking the sex-obsessed rich bitch with a group of porcupine like quills right in the ass which leads to a scene in which she gets them removed one by one while over the knee of Mr. Lazar.

I guess when you buy a castle in Romania to be your soundstage and studio you make sure you use it and get your money's worth but this is a case where I really think HIDEOUS sets up, even if only barely hinting at it in my mind, a more exciting and as far as Full Moon is considered, original, film than this movie that could easily be another Puppet Master sequel by swapping the mutants out for Blade and his puppet pals. The mutant creatures have a great design and look really good on film and I'm really disappointed we don't get to see more of them and more from them. These little guys should have been given the chance to shine but they're overshadowed by a script that is entirely too talky and too slow with not enough pay off.

The Audio & Video
Full Moon delivers a fine looking Blu-ray with a 16x9 anamorphic widescreen transfer that has a sharp picture and a nice film look. There is some scattered speckling and light damage still present but nothing substantial or distracting. Colors are vibrant and natural while black levels are deep. The English audio is presented in a 5.1 surround mix that sounds crisp and is free of any distortions or level fluctuations. There's no background noise to speak of and overall this is among the best looking at sounding Blu-rays from Full Moon to date.

The Extras
Extra features include a commentary track with actors Mel Johnson Jr and Michael Citriniti along with a vintage behind the scenes Videozone featurette. A selection of trailers for other Full Moon titles rounds out the supplemental material.

The Bottom Line
HIDEOUS has some really interesting creatures and decent production values but sells itself short by being an all too familiar, run of the mill Full Moon production that even leaves us unsatisfied as far as monster action goes.