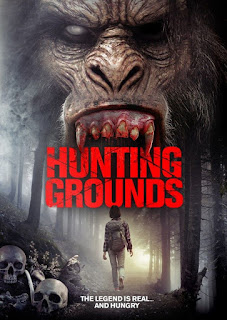 The Film
After losing their home a man and his son have recently relocated to a rundown family cabin in the mountains. Nearby a logging company has begun clearing out a large section of land which has displaced much of the wildlife, including Bigfoot. When an old friend and relative come to visit and check in on the father and son their weekend of catching up is quickly ruined by shitty attitudes and too much drinking. Oh, and a pissed off Bigfoot.

Director and writer John Portanova has previously written films such as The Invoking and The Device which tackle supernatural ghosts and aliens respectively and while I didn't care for The Invoking, Portanova was certainly trending upwards with The Device which I saw a lot of potential in. Now he tackles another type of creature in HUNTING GROUNDS, originally titled Valley Of The Sasquatch, and it is his most successful endeavor yet while also marking his feature film debut as director. It is his writing that creates a sturdy foundation for the film to be built upon however. The set up is rather simple but solid character development and good performances from the actors make it effective. Roger (Jason Vail) and his son Michael (Miles Joris-Peyrafitte) have recently lost their home after a tragic death to their wife and mother and have been given a free place to stay in an old family cabin. Roger is jobless and is an alcoholic while Michael longs for a chance to go to college and do better for himself. When they arrive to the cabin they find it has been ransacked. Soon they're visited by Will, Roger's brother-in-law, and Roger's lifelong best friend Sergio. Will runs a successful gym and Sergio is a total piece of shit enabler to all of the worst things about Roger. This set up easily divides the group in two and gives us characters to care about and one of the most obnoxious, no good pieces of shit I've ever seen in a movie. Sergio can rot in Bigfoot hell for all eternity. 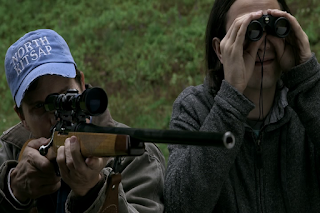 It's on a hunting excursion that the group has their first face to face encounter with Bigfoot which sends Sergio in to a panic and makes him even less likable. I honestly have no words for how much I dislike the Sergio character and it plays so well against a couple of genuinely likable guys and even Roger who you take pity on at times. Sergio is the dirty rug you want to beat violently. It makes the payoff that much more gratifying when the inevitable happens to him as the cabin is being terrorized by the Sasquatch. HUNTING GROUNDS is a bit slow to get going, allowing more than ample time to introduce, develop and allow the audience to familiarize themselves with the cast. The inclusion of an outsider played by Bill Oberst Jr. is a good one as not only is he a great actor but his character helps break up the family bickering that is a constant throughout the movie, even if only briefly. Once we get up to speed HUNTING GROUNDS turns into a fun creature feature with plenty of action and a good design on the Bigfoot suits.

It's nice to see care given to aspects other than the Bigfoot creature itself and it's also nice to see some actual effort given to Bigfoot. Many horror movies centered around the giant apeman either don't care about anything other than the creature and some don't deliver the goods at all, choosing to keep him hidden entirely. Then there's the train wrecks that shit in both ends of the pool and don't develop a good script or characters and fail to deliver a cool monster. HUNTING GROUNDS may not be perfect but it's one of the best Bigfoot movies I've seen lately and an entertaining creature feature. 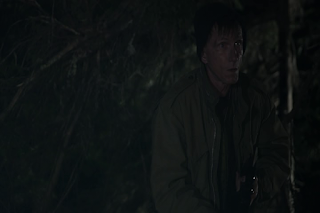 The Audio & Video
Uncork'd Entertainment gives HUNTING GROUNDS a home on DVD with a solid anamorphic widescreen transfer. The film features many dark scenes and the DVD handles them well with deep black levels that don't block up. Colors are natural and the picture has a nice clarity that probably would only be surpassed by the Blu-ray that is also available. English audio is crisp and mixed well with steady levels and no hiss, pop or crackling issues. 2.0 stereo and 5.1 surround options are available and both are fine choices. 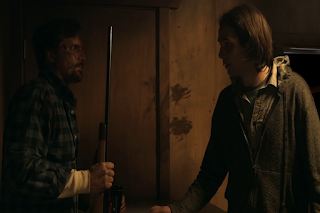 The Extras
Special features include an audio commentary track and a feature length documentary titled "Shadows In The Forest" that is worth watching for Bill Oberst Jr's "Valley Of The Sasquatch" theme song alone. 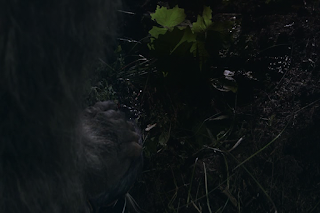 The Bottom Line
There's no shortage of Bigfoot films around but more often than not they're a letdown. HUNTING GROUNDS is a well rounded film and an entertaining creature feature from a director on the rise.

John Portanova was cool enough to take a few minutes out of his day to answer a few questions so check out this brief interview and support HUNTING GROUNDS!

1. Hi John, could you introduce yourself and give a brief background of how you got involved with filmmaking?

My name is John Portanova, I am a Writer/Producer/Director with an affinity for horror. Alongside my production partners at The October People, I've been involved in the creation of 3 feature films and counting.

I became enamored with filmmaking in high school. I was a movie collector (VHS at the time) and began to seek out more low budget indie productions and found that I really enjoyed them. It was after a viewing of Clerks that I decided to try my hand at writing and making my own short films. From there I went to film school and started working on various sets. I actually met my producing partner Jeremy Berg when we were both production assistants on a feature and D'Angelo Midili, one of the main actors in Hunting Grounds, was the star of another feature I PA'd. I highly recommend people wanting to get into the business just get on sets, even if you start at the bottom like I did. You get on set experience and you find people you work well with and can continue to work with as you move into your own productions.

2. You've previously tackled ghosts and aliens and now Bigfoot with Hunting Grounds, any plans to write or direct a movie based on around any other distinct creatures? Chupacabra or Nessy perhaps?

As you can tell, I'm a big fan of the paranormal and "real world" creatures. I think doing any kind of lake monster picture would have to wait until I have a budget to pull it off, but Chupacabra could be interesting...

3. Was there any particular inspiration for the design of the Bigfoot creatures in Hunting Grounds?

My special effects supervisor Doug Hudson and I are both Bigfoot enthusiasts and so we took what we had heard from actual encounters and worked that into our ideas of what we wanted to see. A big inspiration was actually the creature in The Legend of Boggy Creek because I love how its long hair hid its face and when it leaned over the long hair would hang down in the direction of what it was looking at. The face is the hardest thing to pull off in a Bigfoot film, so what they did to get that affect was staple a wig onto the face of their creature. It's simple, but effective. We definitely show more of the face because I wanted to get a performance out of the Bigfoot characters, but that idea of a big hairy mass was something very appealing to us when we were design our creatures.

4. Bill Oberst Jr. is an absolute workhorse in independent film, how did he become attached to the project and how was your experience directing him?

Bill is awesome. The dude never stops working and that made it so we only had 4 days with him. He was coming from another shoot and leaving to go to a horror con, so we only had those few days to get his FX heavy scenes shot. But it was worth it to get to work with him. I'd seen him around in various indie horror films and knew he could deliver a great performance no matter what the material. The character he plays has to play many scenes by himself or with performers in creature suits and so I knew we needed someone of a high caliber to properly pull it off. And it worked because he brought his 100s of sets worth of experience with him and was a total pro. He's one of the best performers I've had the pleasure of working with.

5. What is next for John Portanova?

I actually reteamed with Bill as well as D'Angelo Midili in my next film as a producer. It's a supernatural drama entitled Ayla that'll be coming to film festivals later this year. Beyond that, I'm just working on scripts for future projects to direct.

6. Feel free to plug any projects or websites - Thank you for your time!

Thank you. You can find all of The October People's films over at theoctoberpeople.net. We have a handful out now on VOD and DVD, with Hunting Grounds joining the group on May 2nd. I'm especially happy with the Blu-ray for that film because it features some fun exclusive extras including a featurette that sees me going on my first Squatchin' trip in the Washington rainforest.
Posted by Celluloid Terror (Seth Poulin) at 2:06 PM