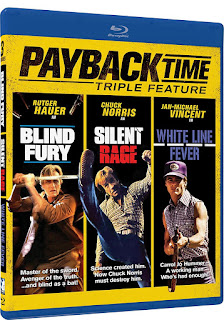 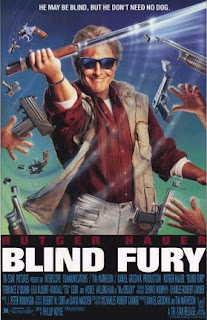 The new triple feature Blu-ray from Mill Creek features a trio of action thrillers from the 70s and 80s making their North American Blu-ray debut. First on the bill is 1989's BLIND FURY from director Phillip Noyce in which a blind Vietnam War veteran (Rutger Hauer) returns home to America after many years to find and forgive his old war buddy but finds he is being held hostage and used to cook drugs while his family is in immense danger. After rescuing the man's insufferable son he sets out to find his old friend and what ensues is a bloody, violent sword fight mess in the vein of Zatoichi The Blind Swordsman. The film is cheesy and entertaining, never dragging or lingering too long on any one scene. While it is far from the Zatoichi films it is heavily inspired by it remains an entertaining piece of 80s action largely thanks to Rutger Hauer's charismatic performance. 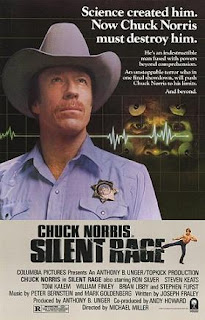 If BLIND FURY was influenced by the Zatoichi character and series, SILENT RAGE blatantly and shamelessly rips off John Carpenter's seminal slasher Halloween, recreating most of the major scenes in the film and even moments from the sequel that would be made just a year before SILENT RAGE. Replacing the Dr. Loomis character played brilliantly by Donald Pleasance with Chuck Norris as a hard hitting, karate kicking sheriff gives the film a different vibe but rest assured it is absolutely Halloween through and through. The villain is a disturbed man on a rampage killing his family when he's shot down only to be revived by an experimental medicine that gives him super human healing abilities that make him almost totally unstoppable. It would have been hilarious to see Donald Pleasance fighting Michael Myers with karate kicks but it certainly wouldn't have looked as legitimate and intense as Chuck Norris is here in a mostly restrained performance that keeps the film away from being overly campy. Even the score hits the same beats and cues as Carpenter's original using the same (albeit lesser quality that will never be iconic) pulsing, pounding synth to add the sense of fear and dread to the picture. SILENT RAGE won't go down as Chuck Norris' best picture or his most memorable performance but it really is an entertaining ripoff of a classic horror film that steers the vehicle a bit more towards the action realm. 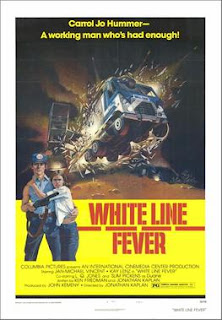 Rounding out the set is the oldest film included, WHITE LINE FEVER from 1975 starring Jan Michael Vincent as Carrol Jo Hummer, a big rig owner who comes to blows with the corrupt trucking industry that runs the show and has it out for Hummer and his pregnant wife. A series of chase scenes featuring multiple tractor trailers, shootouts and fight scenes make this one my favorite of the bunch. The country music soundtrack is a nice compliment to the sweaty, tough guy aesthetic of the film. Supporting roles from L.Q. Jones, Martin Kove, Slim Pickens and Dick Miller make sure the acting is up to snuff. This is the most personal film of the bunch and easily the one that will have you cheering on CJ's quest for revenge and justice against the despicable bigwigs and their henchmen.

Mill Creek has released these three films on a single 50gb Blu-ray disc and the films seem to fit comfortably with no compression issues thankfully which is possible in part because the release is bare bones when it comes to special features without so much as a trailer for the films. That's okay because the transfers range from pretty good to great, skewing towards the top end of that range. BLIND FURY looks the worst of the three films but still looks fine with good detail and colors. The issues with it are a bit of a noisier and softer look than the other two films. SILENT RAGE and WHITE LINE FEVER each have a warm look with strong detail levels and sharp colors. There's no issues with DNR. The anamorphic widescreens presentations are exactly how the films should be shown and there's no doubt these transfers all stand head and shoulders above any previous DVD releases. The lone audio track for each film is a HD Dolby stereo mix that sounds very good with no damage or background noise to interfere with your listening. English SDH subtitles are included.

It's an easy recommendation for the Payback Time Triple Feature from Mill Creek as it is a package of three films that rate high on the entertainment scale and a technical presentation that beats the bargain bin price tag.