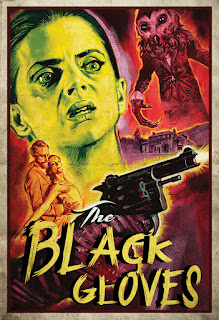 Lawrie Brewster, director of LORD OF TEARS and THE UNKINDNESS OF RAVENS, is responsible for two of my favorite horror films of this decade and he's back with a new gothic noir carrying on the Owlman legacy created in LOT called THE BLACK GLOVES. Just like his previous films Lawrie and Hex Media have set up a crowdfunding campaign to put the finishing touches on the film and make it the best it can be - along with giving the fans some really great perks and incentives for contributing.

Check out the Kickstarter page HERE and consider donating to a project that I'm fully in support of.