ALL THE CREATURES WERE STIRRING (DVD Review) - RLJE Films 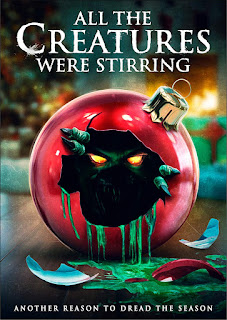 The Film
A couple who would otherwise be spending Christmas Eve alone get together to see an offbeat holiday stage play. Each different act of the play turns into a chapter of this anthology for us to watch. Everything from the holiday office party from hell, a demon that you literally can't get away from, and some stalker action too You would think that getting to see actual short films would be more interesting than seeing what our main couple would be seeing on that tiny theater stage but after viewing ALL THE CREATURES WERE STIRRING I'm just not so sure of that. Maybe the absolutely minimalist version of these stories would have been better. Ok, probably not, but what we're given isn't anything special either. 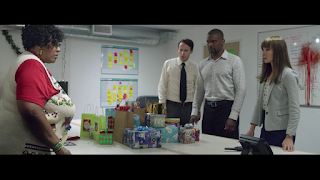 The best part of ALL THE CREATURES WERE STIRRING is easily the ensemble cast who almost all turn in solid to great performances. The directorial team of Rebekah and David Ian McKendry show some skill behind the camera but even with solid performances and well made shorts nothing saves this movie from being a dreadfully boring 80 minutes that is void of any real Christmas spirit or feeling. Nothing about ALL THE CREATURES WERE STIRRING feels like a Christmas movie, horror or not. The stories are barely linked to the holiday and even the set dressings that may have at least put lipstick on the pig were barely Christmasy.

Sadly that's all there is to say. A good cast and competent direction didn't have a chance at saving this lifeless horror anthology.


The Audio & Video
RLJE Films delivers ALL THE CREATURES WERE STIRRING on DVD with a sharp looking 2.35:1 anamorphic widescreen transfer. Black levels are deep and the colors are vibrant and true to life. For a standard definition release this is a nice looking DVD. The audio is clear and mixed nicely so that the dialogue and music compliment each other. There's no distortions to the audio. 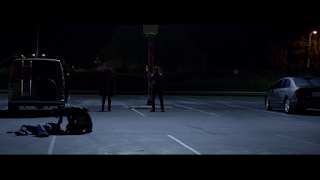 The Extras
A feature length commentary track from the filmmakers is included. 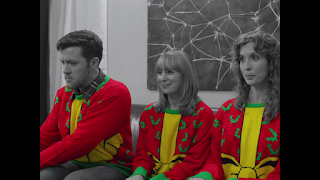 The Bottom Line
There's so many Christmas horror movies that are worth watching that you really don't need to bother with this one at all. Skip it.

ALL THE CREATURES WERE STIRRING is available HERE

Wow was really looking forward it this. I believe it hits a streaming site next month as well I will wait and watch it before buying.

Was looking forward to it, as well. But will wait now for Netflix or Hulu or wherever it turns up that I am already paying for. LOL