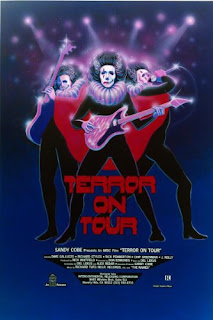 TERROR ON TOUR is a rock & roll horror movie featuring a band called The Clowns who were played by a band called The Names from Illinois and weren't awful. The band's gimmick of painting themselves up like 4th rate Kiss wannabes and committing fake murder on stage has led to real murders being committed at their concerts. Well I sort of like this movie. Or what I could see of it. I don't think there's a single scene that is lit properly (or at all) so many of the killings, sex scenes and anything interesting is unintentionally left to the shadows. Director Don Edmonds previously made two Ilsa movies (She Wolf and Harem Keeper) so I know he knows how to make an exploitation film but maybe he forgot to call the lighting department on this one. It's a bit bland and repetitive obviously having little money to work with but it's still worth a look. It's just a shame that there's really no way this is ever going to look good because of the abysmal lighting. 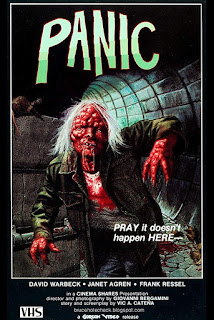 PANIC aka Bakterion features the age old tale of a scientist doing something they probably shouldn't (messing around with highly dangerous bacteria and gerbils in this case) and transforming into a monster because of it (a deformed, goopy, mess of a man in this case). The puss and boil covered man runs amok on his town attacking residents and spreading disease all while eating the flesh of his victims. It's a bit slow, but it's a classic example of a monster on the loose romp but with a bit more slime to it. Italian schlock fans take note.