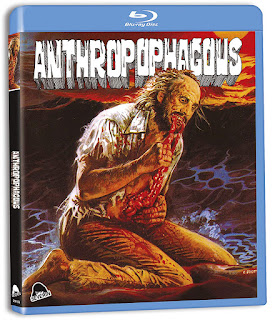 
The Film
ANTHROPOPHAGUS is an infamous horror film from Italian director Joe D'Amato who is responsible for some of the sleaziest and most shocking horror films to come out of Italy. The story centers around a group of vacationers who find themselves trapped on a small Italian island that has been seemingly abandoned and all of the buildings left empty. They qiuckly discover that a disfigured monster of a man has been terrorizing the island and surrounding waters and eating his victims to stay alive.

Joe D'Amato and George Eastman (Luigi Montefiori) co-wrote this pretty straight forward horror film that works because the gore sequences are linked together by an atmosphere of uneasy dread and seclusion for the group trying to find a way off the island without becoming the grim reaper's lunch. Pacing was a bit of an issue for me on my first viewing of the movie but as the years have gone by and I've subsequently seen the film several times that issue has really gone by the wayside for me. I have no issue with the pacing and think there's plenty of action throughout the movie, giving us enough to wrap around the two huge hitting gore scenes that will always pop up in discussion of the film. The acting is on par for Italian horror of this era but the inclusion of a young Serena Grandi playing a blind girl, surviving in the shadows of this island until she's found by the main group adds an interesting dynamic to the group and she also proves a capable counterpart to Tisa Farrow and Saverio Vallone.

ANTHROPOPHAGUS is a pretty straight forward horror film that relies on its signature kills and gore for a reaction and it works as nearly forty years after its release the gore moments are still shocking and very well done and George Eastman is still a horrifying sight. It may not be a work of art but it is one of the most notable Video Nasties and for good reason.

The Audio & Video
Severin Films delivers ANTHROPOPHAGUS on to Blu-ray for its US high definition debut with a new 2K scan from the original 16mm negative. Previously available on DVD in the US and on Blu-ray from 88 Films in the UK, Severin's new release outshines them all. The picture is sharper than any previous release with a rich and natural color palette. Detail is strong and beautifully displays the gruesome special effects, monster makeup and finer textures around the abandoned island.

The film is presented in either English or Italian in a 2.0 DTS HD Master Audio mix, each with optional English subtitles and closed captioning. The audio quality is quite clear and free of any distortions or background noise. It may not be the most dynamic mix but it's properly mixed and sounds as it should.

The Bottom Line
Thanks to Severin Films ANTHROPOPHAGUS finally has a release good enough to match its reputation of a gory classic of the Video Nasty era.

ANTHROPOPHAGUS is available HERE
Posted by Celluloid Terror (Seth Poulin) at 10:22 AM