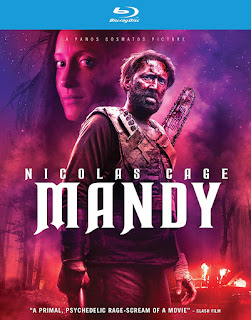 The Film
Panos Cosmatos stormed on to the scene in 2010 with his film Beyond The Black Rainbow which focused on high style and visuals as more important pieces than traditional storytelling and while it wasn't a total grand slam it certainly made an impression. Now eight years later Cosmatos has finally made his second feature film- MANDY. This horror film starring Nic Cage as a logger hellbent on revenge for the murder of his wife features many of the same visual styles, color schemes and overall atmosphere that BTBR does.

MANDY is a much simpler story although it is presented in two vicious halves with the first being a bit of a slow build toward the ultimate climax that will set Nicolas Cage into his frenzied fury of revenge where he will wield everything from shotguns to the most ridiculous handcrafted battle axe you've ever seen. The first act is wonderfully crafted and deliberately paced. You immediately connect about this husband and wife and Andrea Riseborough who plays the titular character is simply someone you care about with a warm and heartfelt performance. The tension and violence builds until the ultimate act of hate is committed and in incredibly vicious fashion. And then the second half kicks in right where the first left off and the pedal is pushed fully to the floor and Nic Cage goes into full fucking Nic Cage mode and becomes an absolute madman of the screen from the moment he gives us a signature Nic Cage freak out and loses any and all attachment to reality and becomes a husband hellbent on revenge.

What ensues is an acid bath of color, sound, blood and guts, and vivid and extreme imagery. MANDY pushes the senses to their limits and is a visceral affair from start to finish. You will experience harsh angles, extreme violence, and the Cheddar Goblin. You will remember MANDY whether you hate it or love it. I love it.

The Audio & Video
Boy oh boy does the Blu-ray from RLJE do MANDY justice. This film is visually striking to put it plainly and this Blu-ray that features a 2.40:1 aspect ratio simply does it justice. The floods of color with mainly hues of red are popping and the detail is exceptional. Black levels are deep and show no signs of blocking or compression. The 5.1 DTS-HD Master Audio mix is powerful and attacks the audience in the same way Nic Cage attacks his enemies. It's vicious. It's also crystal clear and free of distortions and background noise.

The Extras
Extra features include a behind-the-scenes featurette and a selection of deleted and extended scenes.

The Bottom Line
MANDY's Blu-ray treatment is worthy of the modern classic that it has already become. Highly recommended and damn near essential viewing.

MANDY is available HERE
Posted by Celluloid Terror (Seth Poulin) at 1:06 AM