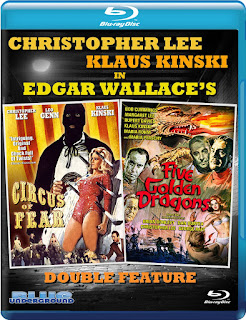 The Films
This pair of films based on the work of novelist Edgar Wallace each feature, appearances by the late great Christopher Lee and Klaus Kinski. That was enough to get me excited about them, especially CIRCUS OF FEAR which is a film I've long wanted to see but the film and I never ended up at the same place at the same time. FIVE GOLDEN DRAGONS was of less interest as the Harry Alan Towers produced spy film's I've seen don't really get my blood pumping but again, Lee and Kinski in the cast made it a must see.

CIRCUS OF FEAR is from 1966 and directed by John Moxey who is best known to me as the director of City Of The Dead aka Horror Hotel which is a brilliant gothic horror film from 1960 starring Christopher Lee. He would pair up with Lee once again here where an armored car heist leads London's detectives to a mysterious circus where a disfigured lion tamer (Christopher Lee) is one of several suspects in a series of accidents and murder but nobody is as innocent as they seem.

I enjoyed CIRCUS OF FEAR it's a well made crime mystery with a strong cast including Suzy Kendall, Margaret Lee Leo Genn and Klaus Kinski. There's enough action to keep things moving along at a comfortable pace and the plot is constantly thickening. The danger of the lions add an element of horror to the picture and there are a couple of more gruesome scenes that had been cut in some releases.

The film's mystery is quite obvious and there's little surprise to the big reveal that comes in the third act. The weak reveal doesn't hurt the picture too much thankfully as the movie is never more than just good. I'd never call the film great but it is an enjoyable watch from start to finish.

FIVE GOLDEN DRAGONS is easily the more visually appealing of the two films. This Jeremy Summers (House of 1,000 Dolls, Vengeance Of Fu Manchu) stars Bob Cummings in what would be the former Hitchcock cast member's final feature film. Cumming stars as Bob Mitchell, a wealthy American playboy type (why they chose a rather washed up actor at the end of his career for this doesn't make sense to me) who is quickly thrown into a dangerous and life threatening situation between local mobsters and a group known as the Five Golden Dragons who hope to take over the world's economy without revealing their identities to each other until some grandiose ritual of key turning, box opening and gun shooting. It's up to Mitchell to reveal the identities of the Five Golden Dragons if he can survive long enough.

FIVE GOLEN DRAGONS is easily the more visually stimulating and appealing of the two films. Shot at Shaw Brothers' Studio in Hong Kong this film has a very exotic flavor filled with beautiful bikini clad women, boat chases and strikingly colorful costumes including the golden dragon masks. The visuals of FIVE GOLDEN DRAGONS are its best asset as the writing is awful. The film is apparently a comedy because Bob Mitchell takes the entire thing as joke despite very real danger and attempts on his life he's laughing and joking throughout. That may be forgivable if the movie didn't have extremely out of place and down right bizarre music and sound cues that would fit more in a 3 Stooges slapstick act than a spy thriller.

On top of this the majority of the cast is given nothing to do, including Klaus Kinski who shows up every half hour for about 15 seconds and Christopher Lee who is relegated to taking off a mask and is given about 10 seconds of screen time. I like the art direction in this film but sadly that's about it.

The Audio & Video
Blue Underground makes sure you have no reason to search down any other version of these films as they've presented both films uncut with gorgeous 2K scans from the original negatives. Both films feature strong detail in textures, surfaces and especially in close-ups. The grain in wood and the fabric in clothing is immediately evident. Colors are faithfully reproduced from the darker and drearier CIRCUS OF FEAR to the far more bright and vivid color palette of Hong Kong and the costumes in FIVE GOLDEN DRAGONS. The black levels are deep with no signs of blocking up and the more vibrant colors shine without bleeding or looking artificially enhanced. Each film features an English DTS-HD Mono mix that are free of any background noise or distortions. I feel that CIRCUS sounds slightly better with a more crisp and clear sound overall. There's nothing drastically wrong with DRAGONS audio but I don't think it was quite as crystal clear sounding to my ear which leads me to believe it has to do with how the audio was originally recorded.

The Bottom Line
Blue Underground's excellent presentation of these films is probably better than the films themselves but I found CIRCUS OF FEAR plus the appearances by Christopher Lee and Klaus Kinski in both films to be enough to warrant a recommendation.