For immediate release. Cult Epics founder Nico B and film producer Steve Aquilina will be launching a new horror label REEL GORE RELEASING as of August 2016, distributed thru CAV (home of Cult Epics, Synapse, Grindhouse) in North America. With the recent success of the horror films of Jorg Buttgereit (Nekromantik) and Angst, Nico B teamed up with Steve Aquilina from 8-Films to launch a new label for newly produced gore horror films to premiere on video and digital. The first three films are VIOLENT SHIT - THE MOVIE (August 2016), a bigger budget revamp of the cult-schlock-gore classics from the 80s, shot in Italy featuring a soundtrack by Claudio Simonetti's Goblin, followed by MASKS (September 2016), German giallo gore feast from the director Andreas Marschall (Tears of Kali, German Angst), and the return to directing of Luigi Cozzi (Contamination) with BLOOD ON MELIES' MOON (October 2016) with guest appearances by Dario Argento & Lamberto Bava. For more info see www.reelgorereleasing.com and join us for updates at www.facebook.com/reelgorereleasing www.twitter.com/reelgoremovies 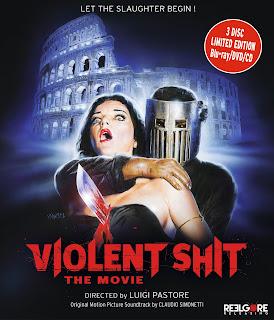