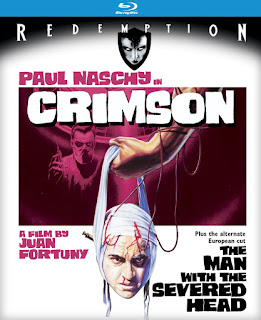 The Film
Surnett (Paul Naschy) is the leader of a gang who have planned a jewel heist but end up in a police chase that leads to Surnett getting shot in the head. Requiring surgery to survive his gang take him to a secluded doctor who has made many advances in brain surgery while experimenting on animals. They hold the doctor and his wife hostage until he does the surgery but a transplant is needed so they decide to take out their head rival who is known as The Sadist. After the transplant Surnett has absorbed many of the personality traits from The Sadist and is even more violent and deadly than ever before.

CRIMSON aka THE MAN WITH THE SEVERED HEAD is a messy take on classic horror film ideas. Transplanted body parts containing pieces of their donor is an plot device as old as horror cinema and it leads to rather sleazy results here. CRIMSON is a mash up of Euro crime, horror and sleazy exploitation. Unfortunately this triangle of ideas never meshes together into a cohesive and successful formula. While individual pieces of the film, including the scene where the gang acquires The Sadist's head and some rough nudie scenes are entertaining enough to keep the viewer engaged the rest of the film is a missed opportunity at something better. Paul Naschy certainly had the ability to be the best part of this movie and when he's given an opportunity to do something other than lay around in a bed in various states of conciousness he generally is.

But the messy mash up of ideas proves time and time again that it just doesn't work. There's far too much down time and unnecessary subplots such as various members of the gang looking to take revenge for being left behind. Only touching on horror elements and never fully becoming a horror movie, CRIMSON is probably best described as a horror influenced exploitation film but it's much more than that while being less than that as well.

It all comes back to to the messiness of the execution. Director Juan Fortuny's visual style is straight forward and it works but bringing the elements of the story together obviously was not his strong suit and CRIMSON ends up being just a fraction of the success that it had the potential to be.

The Audio & Video
Redemption Films is back with their first Blu-ray release in a number of months once again in conjunction with Kino Lorber and they've picked up right where they left off. CRIMSON starts out a little rough around the edges with some noticeable wear and tear to the original 35mm film element source material. That doesn't last too long and the picture quality quickly turns around into a natural film looking transfer with healthy and fleshy skin tones, vivid colors and strong detail levels in surfaces and textures. Speckling remains throughout but the vast majority of the this 1.66:1 anamorphic widescreen transfer is great. There are two audio options depending on which version of the film you watch - the shorter English version features an atrocious English dub that sounds ridiculous. Now the quality was fine but the dub itself is laughable. I only scanned through that version as I was more interested in watching the extended French version that has a French audio track with optional English subtitles. The sound is crisp and clear, with a stable mix and no damage or background noise. The subtitles are translated properly and are timed perfectly.

The Bottom Line
There's a couple reasons to pick up CRIMSON and they include Paul Naschy being under represented in your collection and supporting Redemption Films because I want them to get back to a more frequent release schedule!