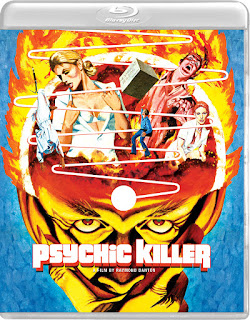 The Film
Arnold is a quiet and reserved man who is very close to his mother. Arnold becomes falsely implicated in a murder he didn't commit and is put away in an asylum. While locked away Arnold meets another man who isn't crazy and is simply waiting out his time until he can take revenge on the pimp that turned his daughter into a whore. This man teaches Arnold the method of Astral Projection - the power to project yourself in an out of the body experience to another place and physically manipulate items. When Arnold is released he comes home to find that his mother has died and decides to take revenge on the people responsible for locking him away while his mother was dying using his new found psychic abilities.

PSYCHIC KILLER could easily have been a corny, poorly made film that would have felt dated only a decade later. Instead the talent behind the film created a really solid horror film that works as well in 2016 as I suspect it did when it was originally released 40 years ago. Ray Danton uses his decades of experience acting along with the knowledge gained in directing two previous feature length horror films to make PSYCHIC KILLER an engaging and straight forward but effective horror film. The screenplay by Greydon Clark creates some memorable moments and murder sequences while seamlessly working in doses of dark comedy that never feels out of place. The construction site murder sequence features the heaviest dose of that dark comedy, enough to bring about an actual laugh or two but it's sprinkled throughout the film and feels completely natural to the film. 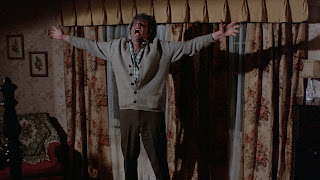 The cast is great, giving the film a sense of class that a lesser cast may not have been able to do. From star Jim Hutton as the quiet but vengeful Arnold to Julie Adams who is famous for her role in The Creature From The Black Lagoon and Aldo Ray who has hundreds and hundreds of credits and became a staple of horror and exploitation films in the 70s and 80s, the cast is chock full of veritable A-listers who could carry a film with a pedigree and budget 10 times that of PSYCHIC KILLER. There's no questioning the talent in front of and behind the camera.

While watching the film I had a strong feeling of memories towards the 1986 demonic horror film Witchboard in which a student is terrorized and eventually possessed by an evil spirit after communicating with it through a Ouija board. While the film's are two different beasts they feel very similar at times, especially before the possession occurs in Witchboard. The death scenes largely catch their victims by surprise and I wouldn't be surprised if there was a bit of inspiration from PSYCHIC KILLER in the Kevin S. Tenney film that came a decade later. 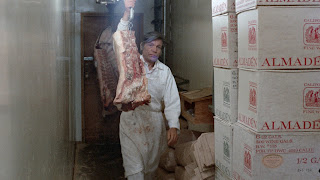 PSYCHIC KILLER is almost the total package. It has solid effects, a dark sense of humor that compliments the tone of the film but never becomes the leading emotion or feeling and a rock solid production. There are a few moments where the film takes on a meaner and nastier feeling and gets a bit gory as well. It's not perfect as I think the beginning and ending are both rushed along, particularly the beginning where you sort of just have to accept that Arthur learned the methods of Astral Projection but it's easily forgiven when you settle in and the rest of the movie plays out.

The Audio & Video
There's just a couple fleeting moments that keep Vinegar Syndrome's new 2K restoration and transfer taken from the original 35mm negative from being absolutely pristine but I probably couldn't be any happier than I am with the look and sound of this disc. PSYCHIC KILLER has a very basic style based totally in reality. The locations and interiors look like it could be taking place just about anywhere and you could be there. These locations are brought to life with exceptional crispness to the picture with no digital noise or waxiness. The level of detail is high in textures and surfaces and skin tones are healthy and fleshy. Colors are reproduced faithfully and while the the color palette is far from exciting it looks as it should. It's just a wonderful 1.85:1 anamorphic widescreen transfer while the DTS-HD Master Audio Mono mix takes the original audio mix of the film and makes it sound just as good if not better than it probably sounded during its run in theaters in 1975 and certainly any time since. It's not possible that any other home video release could stand up to VinSyn's stunning quality and clarity and crispness on either the audio or video side of things and I don't have to have seen them to say that. There's nothing distracting to speak of and no damage to note and English subtitles are available. 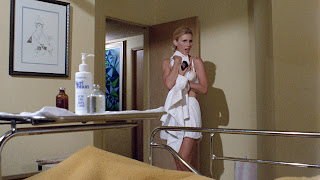 "The Danton Force" - Interviews with Ray Danton's sons Mitchell and Steve, Co-star Julie Adams and 1st AD Ronald G. Smith detailing Danton's life, time in the film business and production of PSYCHIC KILLER.
-"The Psychic Killer Inside Me" - Interview with Greydon Clark speaking of how he broke into the film industry and became attached to this film and had to fight to be a bigger part than he was ever intended to be.
-"The Aura Of Horror" - Interview with Producer Mardi Rustam that is a bit fascinating about how this Iraqi native got into the film business almost out of sheer luck and created his own production company that was a success.

Finally reversible cover art is also included with the package. 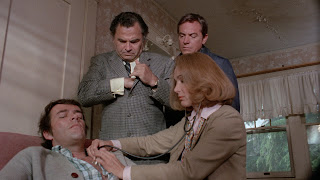 The Bottom Line
I'm a bit dissapointed in myself for never taking the numerous opportunities that I've had to see this film earlier. I think PSYCHIC KILLER has a lot to offer horror fans that appreciate the drive-in cinema era of the 70s and this release should get people talking about the film. It deserves it.