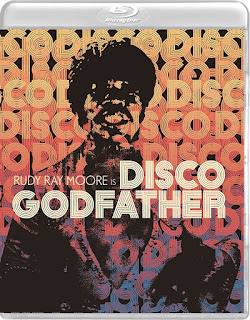 The Film
Rudy Ray Moore stars as the Disco Godfather, a retired cop who is the owner and MC of the hottest club in town. Unfortunately a new enemy has moved into town and is taking over the streets - angel dust. DG is dead set on finding the source of drug and eliminating it from his community.

DISCO GODFATHER is the fourth and final blaxploitation film starring Rudy Ray Moore and may be the most important in the series. The series takes a very real turn in this entry and is very much a commentary on the massive drug problems that big cities were facing in the late 70s. The film keeps the rhyming, trash talking martial arts action that Rudy Ray Moore made famous in Dolemite but it adds in elements of social commentary and surrealism. 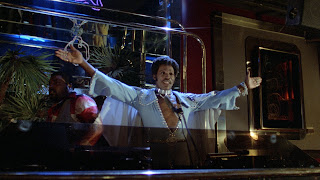 Instead of letting Cliff Roquemore continue on directing the series after making The Human Tornado and Petey Wheatstraw, first time director J. Robert Wagoner was given the reigns of the series. This would turn out to be Wagoner's lone feature film directorial credit but he was really solid overall. He even managed to create some truly terrifying sequences when the angel dust leads to a bad trip. The images he created leave a lasting impression despite their relative simplicity. Cliff Roquemore wasn't left out, he co-wrote the script with Wagoner and produced the film. The script is good, keeping Rudy Ray Moore's personality on full display without having to fully depend on it to make a successful film. Unfortunately, the audience wasn't going to a Rudy Ray Moore film to get some social commentary and real talk. They wanted more of the rapping, ass kicking and laughs that he so effortlessly created. That, paired with the disco theme that was unfortunately timed right along with the death of disco. Audiences were smaller and reception was poorer for DISCO GODFATHER than the previous Rudy Ray Moore films.

I consider the entirety of Rudy Ray Moore's filmography to be classic blaxploitation but DISCO GODFATHER, despite it's shortcomings with a smaller budget that lead to some underdressed locations and perhaps a bit less action, and it's unlucky timing in trying to cash in on a music genre that the public had moved on from, it remains an important look into how drug culture can affect a community in the blink of an eye. But for anyone to care about that they first have to be entertained and you will be entertained with DISCO GODFATHER. Rudy Ray Moore is still funny, still badass and rocking some incredible outfits. You're also going to get the trippy sequences which aren't your rainbow walk through flowery fields that you might hope, but a drug fueled descent into hell. 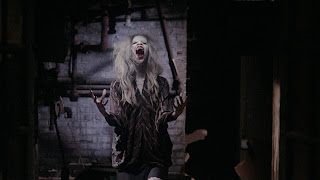 It's upsetting that DISCO GODFATHER wasn't a big success because it certainly deserved to be and it should have been a steeping stone for Wagoner and Roquemore to continue on with their careers and a progression for Rudy Ray Moore's star to grow. Sadly the 80s hit and Moore became a bit of a forgotten commodity and we would only see bit parts for Rudy Ray Moore for years to come and never got the final send off he deserved.

The Audio & Video
Vinegar Syndrome once again gives us a beautiful 1.85:1 anamorphic widescreen transfer. Colors and textures flourish in the brand new 2K scan taken from the original 35mm negative. One look at the baby blue jumpsuit or the gold sequins in Rudy's various outfits shows just how much this BD shines.  Black levels are successful and don't suffer from any macro blocking or compression issues. The DTS-HD Mono audio mix is crisp, clear and clean. The dialogue and soundtrack are mixed well with steady levels. There's no background noise, hiss or any other audible distortions to mention. 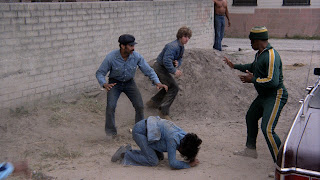 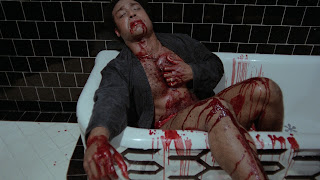 The Bottom Line
Bitch are you for real? A Blu-ray of this quality can only be considered a steal! You can kick and punch but if you don't add this to your collection I'll steal yo momma's lunch! You're better than trash but only if you add this Blu-ray to yo' motherfuckin' stash!