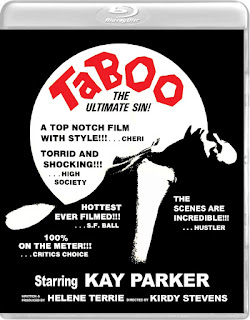 The Film
Barbara's husband has left her, blaming her frigidity and lack of passion for destroying their love life and marriage. Now without an income Barbara has to find a job while taking care of their son who is getting ready for college which is another added expense. Stressed to the max, Barbara turns to her free swinging friend Gina who sets her up with the local swinger scene but Barbara's sexual tension is growing hot and heavy with her own son instead. 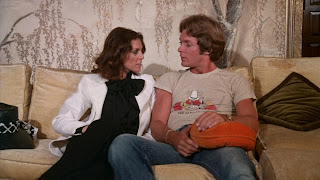 This film's main draw is how shamelessly it deals with kink and, as the title so plainly suggests, taboo subjects. And there ain't nothing wrong with that. Everybody has their own fetishes and incest is certainly one of the biggies. TABOO tackles that fetish and is so sexy that the viewer won't be feeling any guilt while enjoying this film. TABOO can still be called shocking to this day but you can't call it shocking for the sake of shock value. TABOO is a stylish movie, with heaping helpings of sex that will continue to be considered a classic piece of adult cinema for years to come as not only a piece of kinky smut but a look at the harsh reality of being a single mother... who happens to fuck her son.

The Audio & Video
As much as I love Vinegar Syndrome's horror and exploitation output, their real bread and butter is their vintage X-rated and nobody does it better so it's no surprise that their brand new 2K scan of TABOO looks incredible. The amount of detail is exceptional from clothing and surface texture to strands of hair. Colors are strong and vibrant but in no way come across as artificial. The entire anamorphic widescreen transfer has a warm, film look with a nice grain structure that will leave you wondering if you're watching this in an old porno house. The audio is no different as it is handled with a DTS-HD mono track that gets the dialogue and funky bass driven soundtrack across with crispness and crystal clarity. 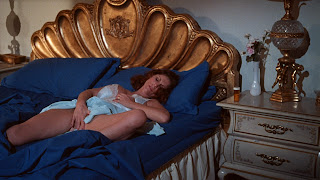 The Extras
Vinegar Syndrome has this release absolutely stacked with commentaries! There's two new commentary tracks, one with Kay Parker and one with writer/producer Helene Terrie. There's also two archival commentary tracks which feature Kay Parker on her own and director Kirdy Stevens and Helene Terrie together. There's also an archival video interview with Kay Parker, a promotional image gallery and reversible artwork. 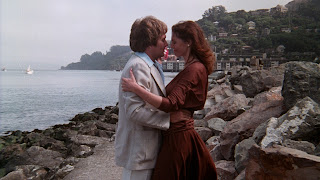