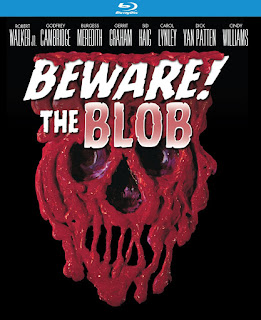 The Film
A geologist brings home a canister of an unknown substance that he uncovered from the Permafrost of the North Pole but doesn't realize that what he's brought home is a deadly alien substance that will devour any living thing in its path if it isn't kept frozen. The terror of the blob returns and quickly takes over a small town leading to the ultimate showdown inside a bowling alley and ice skating rink.

The original Blob film from 1958 is a classic example of cheesy B-movie goodness starring a young Steve McQueen who had not yet become the megastar and heartthrob he was destined to become in the following decades. The film was remade thirty years later and is one of the better late 80s horror movies and a genuinely good ramped up remake. It remains a fan favorite to this day. But in between those two films there was the second Blob movie, BEWARE! THE BLOB, shot in 1972 and directed by Larry Hagman in the only feature film he would direct. It speaks volumes that it was re-released in the 80s with the tagline "The Film J.R. shot!" in reference to Hagman's character on the TV show Dallas. BEWARE! THE BLOB was no hit and barely registered on horror fan's radar. When the film is mentioned it is common to hear people say they weren't even aware this movie existed, thinking the 1958 and 1988 films were the only Blob films.

There's something here though, at least on a minor scale, that deserves to be seen. It feels very much like a small time regional production which gives the film a raw, almost cinema verite like feel. I felt like I was watching some sort of news broadcast of what was happening on screen. It was, at the very least, different and interesting. There's a good bit of hippie culture on display which ends up adding a comedic element as the Blob monster doesn't slow down for their laid back attitudes. The rest of the cast who aren't playing hippie characters are all passable but I wouldn't go as far as to call them good. The acting is rough around the edges, but holds together enough so that it doesn't let the film down. The fact that we are dealing with an obvious slice of B-movie cheese certainly gives the actors a fair bit of leeway. In an interesting bit of crew member trivia, Dean Cundey, who would go on to be the cinematographer on films such as Halloween and The Thing, served as a special effects artist and camera operator on the second unit shots which include numerous close up effects shots of the blob itself.

The film's biggest issue is pacing as there were stretches that were just plain dry which makes getting to the good stuff a bit difficult. The Blob moments are just as fun and silly as you'd expect them to be and an early on shot of our Geologist being devoured by the Blob is a great sight gag with just a bit of creepiness to it. Overall the film is uneven, lacks polish and is definitely the lowest rung on the Blob franchise ladder but it certainly deserves to be seen and enjoyed because, hey, it's a Blob movies and fits in nicely as a sequel to the original film.

The Audio & Video
Kino Lorber does this B-movie justice with a nice filmic looking transfer. The 1.85:1 anamorphic widescreen transfer that keeps a natural looking grain structure and has solid detail level. Colors are vivid, particularly the red of the blob monster which pops just enough. The DTS-HD audio mix isn't overly dynamic but is a crisp and clear way to faithfully reproduce the film's audio mix. The audio is free of any distortions or background noise.

The Bottom Line
BEWARE THE BLOB isn't the Steve McQueen classic or the seriously good 80s remake that would come later but it is an enjoyable slice of cheese that is a nice fit in The Blob universe that is finally saved from obscurity by Kino. An easy recommendation.