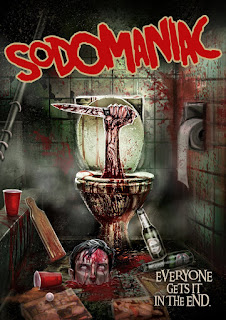 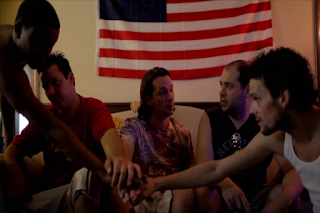 Anthony Catanese co-wrote along with Steve Revesz and directed SODOMANIAC and the duo scripted a genuinely funny, stoner type dark comedy housing a brutal slasher film. The cast, lead by Craig Kelly as the biggest douche bag of the bunch, Hamilton, is great. There are some fantastic exchanges throughout including one with a friend fresh out of prison who is getting some booty and the local nerd who's playing Edward Fortyhands and curses Tim Burton when he pisses himself. For a film condemning such a serious topic SODOMANIAC is as lighthearted as it comes. It blends both ends perfectly.

Anthony Cantanese made sure this film had a style to it as well, with heavy doses of colored lighting, which you don't have to assume is influenced by Dario Argento's Suspiria, there's a line in the movie that confirms it. It makes the generic house party setting looking a lot more extravagant without doing a lot of extra set dressing or needing a lot of extra money. It's not only a choice that makes the movie prettier to look at but it also helps the production value of this independent production. And speaking of production value we can't forget that the killer wears a giant butt on it's head, complete with anus, which I assume is where the killer gets their limited vision. If you think that seeing an oversized butthead mask for 85 minutes would eventually stop being funny you are wrong. I may be 12 years old at heart but the butthead mask is absolutely hilarious. Do you remember the episode of South Park where two parents who have butts for heads try to find their lost butt headed son? Yeah, it's something along those lines and I love it. 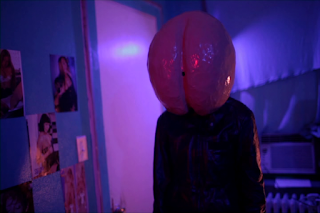 If I have one complaint with SODOMANIAC it's that we are cheated out of the gory goods for each murder. I don't need gore to enjoy a horror movie, I think poor films rely on gore and shock far too much but this movie had me crying out to see some special effect scenes of buttholes being destroyed by the Dildo Of Doom, even if only once of twice. So there you have my complaint. Otherwise you can feel the energy of this movie resonating off the screeen. It's obvious that the cast and crew had a great time making it and I appreciate that energy and reciprocate it while watching. I laughed and laughed and cheered on the killer while knowing that my butthole was safe.

The Audio & Video
Wild Eye Releasing gives SODOMANIAC a home on DVD and it looks great. This film is a very colorful production and the colors really shine through on this disc. Darker scenes are no problem and there's no blocking or compression issues. It's a very clean and strong picture overall in the anamorphic widescreen transfer. The audio is a strong and steady mix with great clarity. Dialogue and music are complimentary and never overpower the other. Job well done on the technical side of this release. 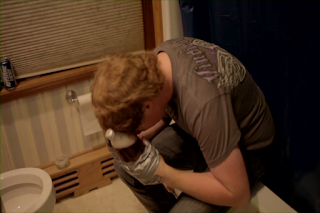 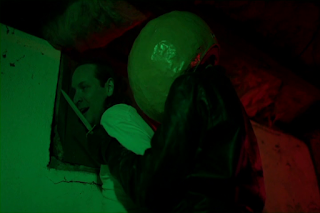 The Bottom Line
It's lewd, crude and filled with... I got nothing. It's entertaining, full of laughs and features the most ridiculous mask in slasher movie history along with a killer we can all cheer for. I had a great time with SODOMANIAC.